FDNY's Calendar Hosed Over, Um, Other Kind of Hose 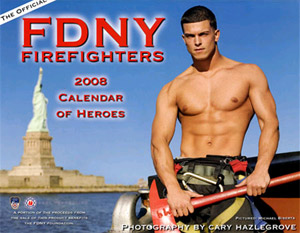 Earlier this week, the FDNY Foundation, a non-profit that raises money for FDNY causes, released the 2008 edition of its popular Calendar of Heroes, featuring some of the Bravest's bare-chested hunks posing in all parts of New York City and thrilling many. But after the calendar crew appeared on the Today show, the eagle-eyed realized that cover boy Michael Biserta, of Ladder Co. 131 in Red Hook, was also featured in a Guys Gone Wild video, showing, as the Post calls it, "his God-given hose." So now the FDNY has decided to stop making the Calendar of Heroes. God, Joe Francis ruins everything!

Apparently all the calendar hunks were screened, but Biserta never mentioned appearance. Someone at the Daily News had the job of transcribing/describing the video:

. The 2004 DVD features Biserta stripping naked at the urging of several frisky women who stand off-camera.

"You girls are bad influences," Biserta tells the women.

The camera follows the completely nude Biserta from the bedroom to the shower and the women gush over his cute face and muscular physique, which he clearly isn't shy about displaying.

Posing provocatively, Biserta and the camera crew then frankly discuss his anatomy - much to the women's delight.

But to many other women's dismay, Fire Commission Scoppetta ruled that firefighters cannot pose in the calendar anymore. The FDNY Foundation agreed, saying, "We're disappointed, but the department's reputation is more important than raising money." Last year's calendar raised $150,000.

Twenty-two-year-old Biserta, who lives in Staten Island's Arden Heights, does not face disciplinary action because he joined the FDNY after he was in the video. He told the Advance before videos surfaced, "It just launched a few days ago, but so far it's been fun. For me, being in the calendar was just another way of supporting the FDNY."

The calendar won't be taken off the shelves, but there will be a "final calendar" published, according to the News. Which means RUN to the FDNY Fire Zone store or Barnes Noble (hey, it's online too) to get your copy with Biserta.