Yesterday afternoon, a worker at a construction site in Kew Gardens, Queens was stuck waist-high in a mud trench for three hours. The FDNY managed to pull him out, after utilizing numerous tools, including a vactor truck from Con Edison that vacuumed out mud.

Marcos Castellon and his brother Miguel were working in a trench when, Miguel says, "Everything came tumbling down." Chief of Rescue Battalion Richard Portello told WCBS 2, "We had rescue paramedics go down and start a line, start a treatment for crush syndrome" because there was hundreds of pounds of pressure from the mud. And a rescue medic told NY1, "What we're trying to combat is, it's called smiling death," and explained that they "gave the worker an IV and pain medication, trying to fight the chemical buildup in his muscles he wouldn't have known about that could reach his heart hours later."

According to the NY Times, "The man’s co-workers tried for an hour to free him before calling rescuers about 4:45 p.m., the Fire Department said. It took rescuers two more hours to free the man once they arrived." Also: "The [dozens of] rescuers used a backhoe, a vacuum truck and a device called an air knife to loosen and remove mud from the site. They then used simple hand tools to dig the man out, working carefully to prevent the walls of the trench from caving in, the emergency worker said." Portello told NY1, "At times, there was only one person that was able to get in there, and they were working almost upside down to dig him out." 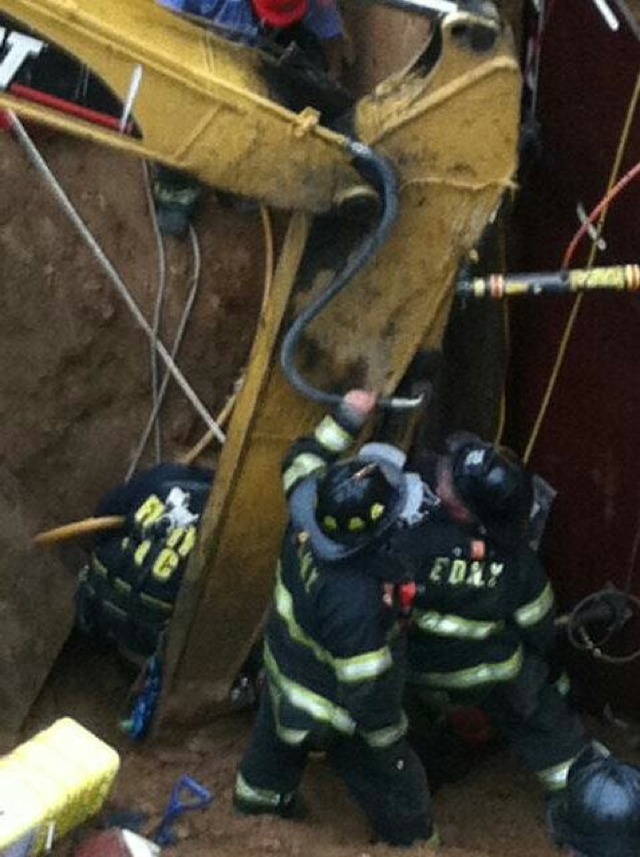 Firefighters working through the mud (FDNY)

Castellon is in stable condition. Earlier this year, a stop-work order was issued for the site at 119-02 83rd Avenue, and the Department of Buildings says that there's no permit for that location.