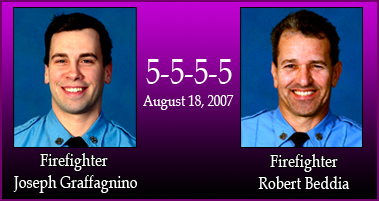 The Daily News has FDNY audio and transcripts from the 7-alarm fire at the Deutsche Bank building. The tapes are harrowing: One firefighter yells, "Mayday! Mayday! Mayday! Engine 24 standing by! I'm lost. I'm trying to make it on the charged hose line. Running out of air!" came a frantic call." Another says, "All the staircases, all the landings are plywooded up. ... It would take us a week to get through and check each one." And then a higher-ranking official says, "I want a roll call! ... I don't give a s--t about the building. I give a s--t about the guys!"

The deaths of Firefighters Joseph Graffagnino and Robert Beddia were characterized by the FDNY in this way:

The firefighters were fatally injured while battling a seven-alarm high-rise fire at the former Deutsche Bank building at 130 Liberty Street in lower Manhattan. The two firefighters became trapped in maze-like conditions on the 14th floor of the building, which is undergoing demolition. They suffered severe smoke inhalation and were taken to NY Downtown Hospital in cardiac arrest where they succumbed to their injuries.

Graffagnino was an 8-year veteran, while Beddia was a 23-year vet. The NY Times profiled the two, as well as their Soho firehouse, Engine 24 and Ladder 5: Graffagnino, who was married with two young children, lived next to a firehouse in Brooklyn as a child and practically grew up there. Beddia, who lived on Staten Island, transferred to Engine 24, Ladder 5 after September 11 (the firehouse lost 11 firefighters). Beddia's neighbor told the Staten Island Advance that Graffagnino's and Beddia's names belong on the list of September 11 victims, "When someone commits a crime and years later that person dies, they are charged with the crime. He died as a cause of 9/11, and it should be put that way because that is what happened. I know not everyone would agree with me, but that's the way I feel."