FDNY Did Not Inspect Deutsche Bank As It Should Have 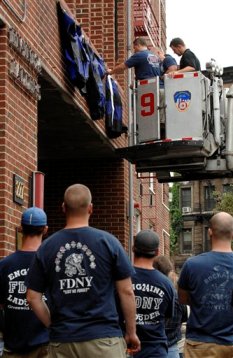 The FDNY did not inspect the Deutsche Bank building every 15 days, "as required by city rules for buildings being demolished" (NY Times). This revelation, coupled with the fact that the FDNY did not have a plan to go into the burning building, prompts the Post to demand that Fire Commissioner Nicholas Scoppetta leave his post.

The city's official update about the investigation into the Saturday fire, which required 275 firefighters and claimed the lives of two, explains, "Commissioner Scoppetta has directed that this investigation also examine why the Department did not have a pre-fire plan for the building; a fire plan is currently being developed for 130 Liberty Street by the FDNY Operations Unit." Better late than never? And though the update includes dates of FDNY inspections of the building, the last time the standpipe system, which delivers water during fires, was checked was 1996.

Bovis Lend Lease, the contractor hired by the Lower Manhattan Development Corporation to dismantle the building (contaminated from the World Trade Center collapse), fired its subcontractor, John Galt Corporation, noting the many safety violations: "The numerous citations issued with respect to employee safety and the failure to properly maintain all required site safety precautions are only some areas of concern, all of which combine to create a breach and an event of default of the trade contract." Furthermore, John Galt Corp. apparently didn't have prior demolition experience.

A former asbestos-removal supervisor at the site spoke to the FDNY - and Daily News - about the problems at the site:

He said the 29th floor was casually known as "Teddy's Tavern" because of the vodka and other booze regularly consumed in that floor's decontamination unit, where men cleaned up and ate meals. The 29th floor has since been demolished.

He said the demolition subcontractor, John Galt Corp., hired one electrician to monitor 10 floors, instead of the required two per floor. He charged that some workers set up transformers on work floors and failed to safeguard the red-hot electrical generators.

The widow of one firefighter, Joseph Graffagnino, told the News, "I hope my husband's death wasn't in vain. I hope he died for a reason and not for nothing, because if it was for nothing then my life was destroyed for nothing."

Graffagnino's funeral is today; the funeral of fellow fallen Engine 24, Ladder 5 firefighter Robert Beddia is tomorrow. The Post details how firefighters improvised when the standpipe did not work by creating a 200-foot hose from many different hoses to reach a hydrant on the ground.

Photograph of firefighters putting bunting outside Engine 4, Ladder 5 in Soho on Sunday by AP/Louis Lanzano