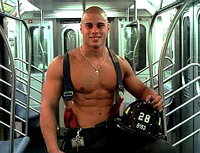 An off-duty firefighter was charged with misdemeanor assault after he beat up a Brooklyn motorist in front of the driver's wife and two sons. Michael Crespo, who is a 28-year-old copier technician, says that he was driving in Brooklyn when Stephen Spagnola jaywalked in front of his car. Spagnola, who is with FDNY Engine Co. 28 and also posed as Mr. September in the 2005 edition of the FDNY's racy Calendar of Heroes, objected to Crespo's objections and soon enough, Crespo was out of his car getting brutally beaten by Spagnola and a his friend. The Daily News quotes Crespo's wife, "I was hysterical. My oldest child saw everything. He was afraid for his daddy." 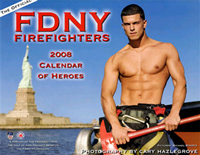 To the disappointment of many, the Calendar of Heroes is no more. The FDNY claimed this summer that the 2008 edition would be the last one, when sharp-eyed viewers connected an appearance of Michael Biserta on The Today Show to his featured appearance on a Guys Gone Wild Video. Made before he joined the department, the video shows Biserta displaying his "God-given hose." Biserta didn't face disciplinary action because he made the video before he joined the department, but commissioner Nicholas Scoppetta and the FDNY Foundation both agreed that the department's reputation was more important that the approximately $150,000 the calendar raised every year.