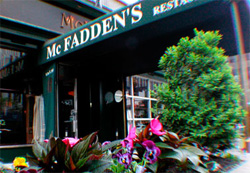 It took officers from four precincts and the elite Emergency Services Unit over a quarter of an hour to break up a massive bar brawl at McFadden's on 42nd Street and Second Avenue around 10:30 on Saturday night. Police say a crowd of about 20 people were involved in the melee when it erupted out onto the street. Five people were finally arrested, including two firefighters, and another two firefighters were given summons for disorderly conduct after they went to the stationhouse and harassed cops about the arrests.

The Times reports that John Tew, 37, of Rescue 4 in Queens, and Matthew Veitch, 27, of Ladder 173 in Queens, (both from Long Island) were drinking at the bar with friends for several hours before the group spotted 22-year-old Christopher DiForte of Staten Island wearing a T-shirt with the department's logo. An NYPD source tells the Daily News, "It was a run-of-the-mill T-shirt. The real firefighters took umbrage that he wore it." One firefighter asked DiForte which unit he was in, and when he replied that he was not in the FDNY, they started harassing him.

They NYPD source added that in the ensuing scuffle DiForte began "swinging his pint glass wildly... and shattered the glass on the head of 25-year-old Matias Acevedo, a friend of the firefighters, who suffered a nasty gash." DiForte and two other men were also charged with assault; all five of the arrested men were released Sunday. As for the T-shirt, you can buy yours at the FDNY Fire Zone, "a not-for-profit corporation established to fund Fire Safety in New York City and the professional development, training and education of members of the FDNY."