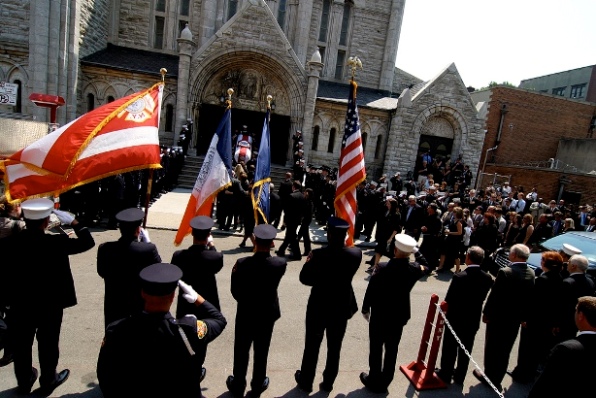 Thousands,of people paid their respects at the funeral of Firefighter Daniel Pujdak. The 23-year-old firefighter fell while responding to a Brooklyn fire last week. Mayor Bloomberg said during the funeral service, "Your terrible loss is felt by all 8.3 million people of the city that Daniel gave his life for," while Pujdak's father Leo said, "If you know Daniel, you know that he's going crazy right now. He's not the focus-of-attention kind of guy." And Captain Jerry Horton, Jr. at Ladder 246, where Pujdak worked, said, "He was a hero and he should be remembered as a hero. He was living his dream. I wish I had 25 firefighters just like him.”

Pujdak was raised in Greenpoint, and his funeral was in the neighborhood's St. Cecilia Catholic Church. Reader Raymond took photographs of the procession and sea of people outside the church. He said that in addition to firefighters paying their last respects to Pujdak, neighbors were standing and crying in the sweltering heat. 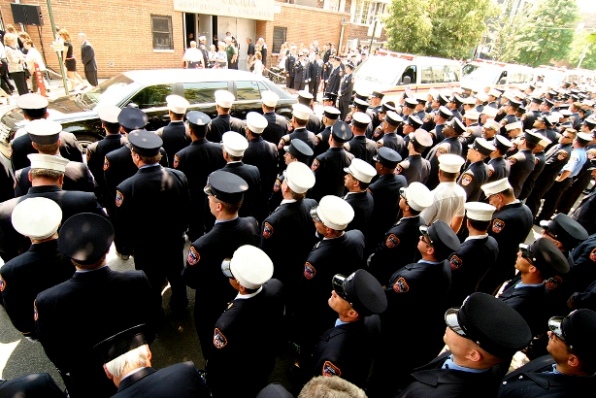 The fire is believed to have been started by careless smoking - a cigarette left on a window sill of the fourth floor of a factory. Pujdak's family has said they do not blame the smoker.

Photographs of Firefighter Daniel Pujdak's funeral by ~Raymond on Flickr