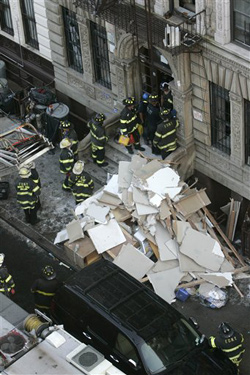 The Fire Department believes a bad connection from the gas line to the stove, not a gas leak, caused the explosion that caused a flash fire at 10 West 119th Street in Harlem on Saturday. Several people were injured, including four children and their mother who lived in the apartment.

Initially, the FDNY said a gas leak on the first floor caused the blast, but Con Ed found no evidence of a gas leak. Now the FDNY explains that the "source of the explosion was natural gas, which fire marshals believe leaked from a flexible hose connection behind the stove" in the apartment. The NY Times reports that the gas odor was "masked by the smell of fresh paint," and the Post says that some residents had complained about the smell - for two weeks. Fourth floor resident Diana Perez said, "I kept telling them about the gas smell. I talked to my super. They said everything was OK, 'We'll take care of it.' For two weeks, it's been very bad. I've made numerous complaints to the management company." And a resident in the neighboring building also mentioned smelling gas two weeks ago.

The victim's husband, Rassa Alghaithi said, "I thought the apartment was just freshly painted. I didn't think [the odor] was gas." The landlord told the Daily News he served the family with an eviction notice because they were six people living in a one-bedroom apartment.

The victims, 29-year-old Aloug Hassnin and her four daughters, ages 15 months to 5 years old, are all in critical condition. A cousin said, "The doctors told us there's a 15 to 25% chance they'll live. They're very bad now. We pray for the best for them."