Father Was Targeted, But Son Was Shot 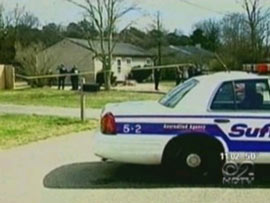 While an 11-year-old boy remain in critical condition after being shot in the face, Suffolk Country police believe his father was the real target. Newsday reports that Jeffrey Langhorn's father had apparently "fought with" a group of men "before one of them fired three shots."

Suffolk Detective Edward Reilly said the father, also named Jeffrey Langhorne, had a machete and "began tussling with one or two of the men." The boy, who was sick and home from school, had been sitting in the North Bellport home's kitchen when the shot, fired from outside, hit him.

Police also think there's a connection between the fight and over 15 pit bull dogs found on the property. The dogs, which were taken into a shelter, had neglected wounds characteristic of fighting dogs and a shelter director described the dogs' injuries as "big, open wounds on the neck," "torn ears from bites" and "very serious ear trauma."

The boy is also suffering from a spinal cord injury and underwent surgery yesterday.The boy's mother asked for help ("This is not a game. Anybody that knows something should come forward.") while police said his father was cooperating.

#child shot
#crime
#dog fighting
#gunfire
#long island
#north bellport
#pit bulls
Do you know the scoop? Comment below or Send us a Tip
A new Gothamist is coming! We’ve moved comments over to our beta site. Click here to join the conversation and get a preview of our new website.