Father Kills Son, Then Self in Brooklyn 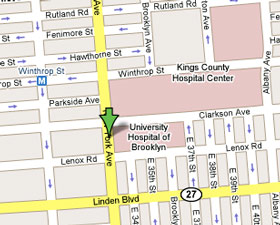 A 46-year-old Brooklyn man shot his 21-year-old son and then turned the gun on himself in Prospect Lefferts Gardens. Lebrun Dossous, who the Post and Daily News describe as being depressed (the News suggests that he was "despondent that his son was moving out"), shot his son five times while he was taking a shower. Then Dossous shot himself in his bedroom.

Yesterday morning, a neighbor called to complain about a leaking water. George Dupree told the NY Times that leaking water started to drip into his bathroom Friday night, and by 5AM yesterday morning, the roof had caved in. The Fire Department came to investigate the leak and found the bodies, including Jordany Dossous' body in an overflowing tub. Dupree's walls have reddish-brown stains on them.

A police source said, "The father left a suicide note. He wrote that he was depressed and friends had tried to help, but nothing worked." Some neighbors said that Dossous and his son Jordany had argued about Jordany wanting to move out. Dossous' wife had left him last year.