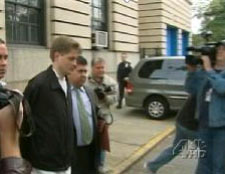 A mother discovered a horrible scene when she returned home from shopping on Saturday. Louise Rojas' 13-month-old baby was on the floor and unresponsive and her husband Peter O'Keeffe, who was supposed to be baby-sitting, was nowhere to be found. Rojas called the police and the baby was pronounced dead at Jamaica Hospital. O'Keeffe, arrested at his mother's house in Brooklyn yesterday, was charged with second-degree murder and endangering the welfare of a child.

Rojas had left her husband with the baby for a few hours, and sources say that O'Keeffe may have tried to quiet the baby by hitting her. And besides the skull and brain injuries, the baby also had a bite mark on her body. Neighbors gave conflicting accounts of the couple: Some said they were quiet, while other said they had been hearing arguing lately. But they all agreed the crime was a shock and that the baby was very sweet.

The Daily News points out that he was wearing hospital garments when leaving the precinct, a sign that his clothes were probably taken in as evidence (the police also took boxes of evidence from the home). He will be arraigned in court today.