Fate of Brooklyn Nets Could Rest on Markowitz's Game 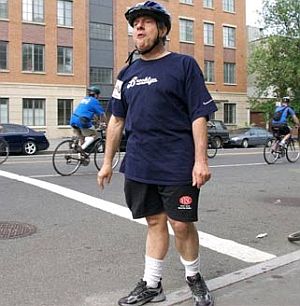 The revelation that Bruce Ratner, would-be Atlantic Yards developer and Nets owner, has been secretly discussing selling the team to the owners of the New Jersey Devils, has put Brooklyn Borough President Marty Markowitz’s athletic reputation on the line. Newark mayor Cory Booker, who would love the team to come to the Prudential Center in his town, has offered to settle the fight for the Nets with a simple, winner-takes-all game of hoops: Cory vs. Marty, one-on-one.

The challenge was issued after Markowitz rushed out a press release dismissing Newark as Brooklyn's “western suburb” and vowing that they would never get the Nets. One of Markowitz’s campaign promises was to bring a top-level national sports team back to Brooklyn. But with the economy tanking and Ratner’s controversial project stalled by lawsuits, that promise is looking increasingly empty.

Nevertheless, Booker’s challenge brilliantly plays into Markowitz’s Achilles heel: an abiding passion for publicity stunts: “I accept Mayor Booker's challenge and must remind him that I am only 5-foot-5. I’ll accept the challenge only if I can have a ringer play against him.” Expect both pols to keep milking this one, with Booker soon to demand his own ringer, and Markowitz proposing a competitive eating contest instead.