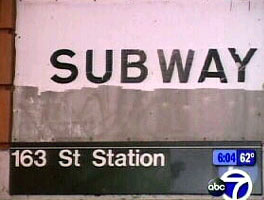 Early yesterday morning, an 18-year-old was shot on the corner of Amsterdam and 161st in Washington Heights. Donovan Gilbourne had been waiting at a bus stop when he was attacked. WABC 7 reports that then he "stumbled to ...the West 163rd Street subway station...where he collapsed and died."

Gilbourne had been with a friend, who was not hurt. The friend also found a cop to help, but Gilbourne died on the way to the hospital. Gilbourne's mother said that her son and his friend had gone to the subway station earlier to buy a Metrocard for the bus and that he was shot after that.

At least two people were seen fleeing the scene. The police are still looking for suspects, and apparently Gilbourne's friend got a good look at them.