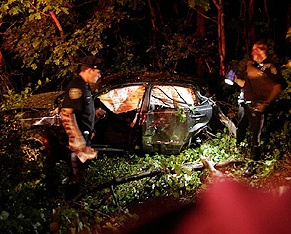 A 17-year-old girl was killed after a drag racing incident on Staten Island last night. According to the Advance, a 2003 Honda Accord and 1994 Ford Mustang crashed into each other on Veterans Road West near a Charleston shopping mall. Six other teens were injured.

The Ford, which had a tank of nitrous oxide (to help it go faster) in the trunk, swerved across the road. The Honda "smacked into a metal stanchion protecting a fire hydrant" and split in half. Michelle Arout and Tommy Barclay were sitting in the back seat of the Honda and were thrown from the car; Arout died while Barclay is in critical condition. The Honda's driver and front seat passengers are in stable condition at SIU Hospital (the front was at least 30 feet from the back of the car; the two were able to walk away), while the Ford's driver and passengers are in stable condition at Ocean Breeze Hospital.

The speed limit for the road is 35 MPH, but no charges have been filed against drivers yet. A commenter on the Advance's website silive.com wrote, "Judging by the vehicle type and location, I would say it was a [drag] race. You gonna race, don't have any passengers with you. But you should not race on city streets at all. Go to Englishtown, N.J., and do it right." (The Old Bridge Township Raceway Park is in Englishtown, NJ.)

Photograph from the SI Advance