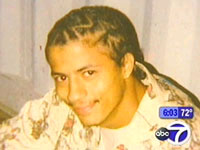 A 25-year-old driver was shot and killed at First Avenue and East 117th Street. Police believe that Jayson Tirado and the driver of an SUV got into an argument when an accident on the FDR (a motorcyclist hit a light pole after trying to switch lanes and died) prompted them to exit onto the streets.

The Sun reports that the two drivers started arguing before turning onto First Avenue and the SUV's driver started shooting at the Honda at East 117th Street. Tirado continued to drive until East 120th, where he pulled over. He was pronounced dead at Harlem Hospital.

Tirado lived on the Lower East Side in the Jacob Riis Houses. A neighbor told the Daily News, "Just two days ago, he bought me breakfast and a MetroCard to get home. He was a good person." And last week in Staten Island, a Brooklyn driver, believing he was cut off, drove into a woman (who exited her car to exchange words with him earlier) twice.

NY State makes a distinction between road rage and aggressive driving: Road rage involves physical assault and violence while aggressive drivers are defined as "operating a motor vehicle in a selfish, bold or pushy manner, without regard for the rights or safety of the other users of the streets and highways."

Update: WNBC reports that an off-duty police officer is being questioned in connection to the accident: "Investigators said they want to know if the off-duty officer had been drinking and fled the scene after the shooting."