Fatal Opioid Overdoses In NYC Have More Than Doubled Since 2010

Opioid-related overdose deaths in New York City increased 66% between 2010 and 2015, according to new statistics from the Department of Health. Of the 937 people who died of an opioid overdose in New York City last year, 556 of them, or 59%, died while taking heroin.

The majority of these overdoses took place in the Bronx and Staten Island, although overdoses in the latter actually decreased slightly in 2015. Staten Island has had a serious heroin problem since the late aughts, when a crackdown on the recreational use of prescription painkillers coincided with a dip in heroin prices. In the Bronx, heroin has been packaged and sold on a large scale for decades.

But the city also noted a sharp uptick in fatal overdoses in an area covering Downtown Brooklyn, Park Slope and Brooklyn Heights, where fatal heroin overdoses increased 170% between 2014 and 2015. In Hunts Point and Mott Haven in the Bronx, where fatal heroin overdose rates were the highest last year, 18.8 people per 100,000 died from the drug. There were significantly fewer overdoes in Brooklyn—about 6 people per 100,000 for the entire borough.

Last year, the NY Times declared a nationwide heroin epidemic, and reported that 90% of first-time users are white. The latest city statistics show that fatal heroin overdoses are most common among white New Yorkers, and have been since 2010.

"These new data confirm that opioid addiction is a growing problem and it is the reason the Health Department has taken a comprehensive approach to prevent overdose deaths in New York City," said Health Commissioner Dr. Mary T. Bassett. "We are especially concerned about overdose deaths in the Bronx, and will intensify our efforts to expand access to life-saving medications, such as naloxone, in the borough." 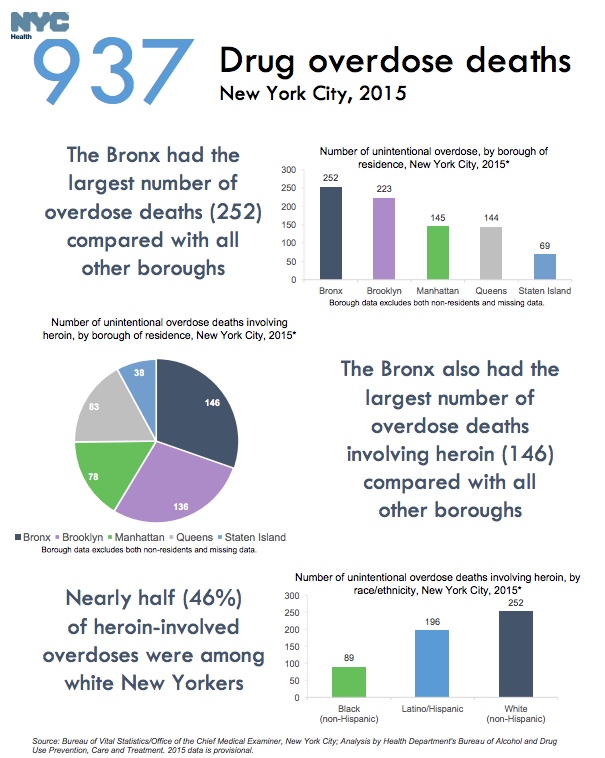 Mayor de Blasio launched a task force to combat opioid overdoses this spring, and today the health department extolled his efforts. The NYPD is required to carry nalaxone, an overdose drug that recently became available over-the-counter at pharmacies across the city.

The mayor has committed to distributing an additional 7,500 nalaxone kits to neighborhood organizations, and the city recently launched a Nonfatal Overdose Response System, which is intended to help social workers follow up with non-fatal overdose victims.

The Medical Examiner will also begin testing for fentanyl, a drug that is 50 to 100 times more potent than morphine, according to the city. The drug is intended to treat acute and chronic pain in patients with advanced stages of cancer, and often leads to overdoses among recreational users who assume they are taking heroin. The city noted this week that overdoses involving a mix of fentanyl and heroin were most common in the city's poorest neighborhoods.

Last year, 146 overdose deaths, or 16% of the total, involved fentanyl. This is a significant increase over the last ten years, when at most 3% of overdoses were attributed to the drug.

Notably absent from the Mayor's opioid overdose reduction efforts is the establishment of Safe Injection Facilities (SIFs), where chronic drug users can shoot up with access to clean needles, and with staff on hand trained to respond to an overdose. Manhattan State Assemblywoman Linda Rosenthal announced this spring that she'll push for a state-funded SIF program, but the city has yet to confirm any official assessment of this approach to harm-reduction.

SIFs operate on the assumption that heroin-related deaths are inevitable as long as addicts feel pressure to shoot up out of public view—often in parks and public restrooms—and scramble for access to clean needles.

At VOCAL NY and the CORNER Project, bathrooms have a steel countertop, syringe disposal boxes, and staff members on call. And the CORNER Project is one of several groups that maintains syringe exchange programs, where users can stock up on clean needles.

But CORNER Project director Mark Towsend told Gothamist on Tuesday that short of safe facilities for chronic users to shoot up, NYC can't hope to reverse the current trend in fatalities.

#drugs
#heroin
#opiods
#overdoses
Do you know the scoop? Comment below or Send us a Tip