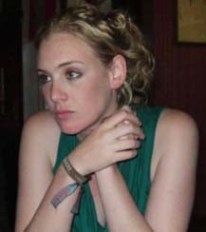 Tenzing Bhutia, a 21-year-old Baruch College student, is being held on $75,000 bail after fatally driving into a young woman crossing Bowery near East 4th Street in Lower Manhattan. Bhutia did not stop after hitting Julia Thomson early Sunday morning, and when police found him - and his father's damaged Mercedes Benz in Queens - hours later, his blood alcohol was 0.087, above the 0.08 legal limit.

The Post reports that Thomson (pictured), a Scottish transplant who lived in the East Village, had been showing a friend the town when she was hit. A doorman at Phebes said he and others tried to comfort the friend, "We tried to calm down her friend, but she was just really upset." Thomson's father told the Scotsman that his daughter had planned on staying in NYC for another year; her MySpace said, "I'm having the time of my life."

Bhutia was charged with vehicular homicide, in addition to DWI and leaving the scene of an accident. Police found that Bhutia knew he hit something but still did not stop. Assistant DA Dafna Yoran said that Bhutia "drove away immediately to avoid responsibility."

Bhutia's sister Kessang cried, "He's a good kid! This was just a mistake. It was an accident," during his arraignment yesterday. However, a friend of Thomson's said, "He should definitely spend time in jail. How do you run away from something like that?"