Fatal Downtown Crash Driver to be Charged with DWI 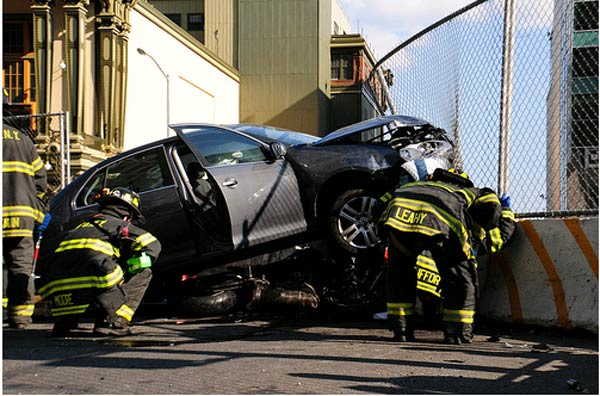 Police say the driver who hit two motorcyclists, killing one, in Lower Manhattan yesterday afternoon will be charged with driving while under the influence; WABC 7 says he was "believed to be on drugs."

The driver, in a Volkswagen Jetta, was heading south on South Street when, per the NY Sun, he "passed a parked MTA bus and then struck the motorcyclists at the intersection of South and Whitehall Streets." Two people on one bike were hit, while the Daily News reports the car "ran over the second bike, fatally crushing the rider underneath." The car continued into barriers near the Staten Island Ferry Terminal.

One reader suggested the car was traveling very fast. A man driving a bus told the News the car "hit the motorcycles from behind and never stopped until it rammed the wall. I'm driving a bus full of 13-year-olds. I'm sorry they had to see this."