The family of Omar Edwards, the rookie off-duty police officer who was shot by a fellow cop in Harlem on Thursday night, were grieving yesterday. A family friend told the Daily News that Edwards' mother said, "My son is dead, my son is dead. They killed my son." The friend also said Edwards' wife Danielle is "in pieces right now....For the sake of the kids, the family is trying to remain strong." The Reverend Al Sharpton, who has already called for a federal investigation of the shooting, is holding a vigil and rally in Harlem this morning. 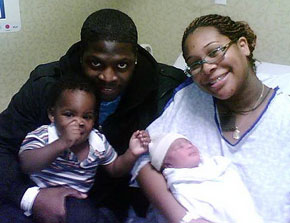 Investigators are examining the circumstances that led to and occurred during the deadly confrontation—the NY Times has an interactive map showing the sequence of events. Apparently Edwards, who had just gone off duty and was wearing plainclothes, noticed a man, Miguel Santiago, breaking into his car on Second Avenue (between 124th and 125th Streets), so he gave chase. with his gun in one hand.

A group of on-duty anti-crime police officers, in an unmarked car, came upon the chase on 125th Street between First and Second Avenues. Apparently officers yelled at Edwards to drop his gun—Santiago heard a cop say, "Police, drop your gun" and other officers heard Officer Andrew Dunton say, "Police! Stop, drop the gun! Drop the gun."

The NY Times reports, "Officer Edwards turned, and the nose of his Smith & Wesson pistol turned with him, toward Officer Dunton. From behind the unmarked car’s door, where he had taken cover, Officer Dunton fired his gun from a distance of 15 feet; he later handcuffed Officer Edwards, as policy dictated." It's unclear whether Edwards identified himself as a cop; it was only when other responding cops arrived, after opening Edwards' shirt and finding his Police Academy t-shirt and his badge, that they realized another cop was shot.

According to the Post, "Edwards may have violated NYPD guidelines on how to handle confrontations with police when in plainclothes by not giving up his pursuit and surrendering." The Post also says the NYPD "immediately ordered all officers to undergo confrontation training" and that "Dunton and his two colleagues were assigned to administrative duties pending the outcome of the investigation." It's likely the shooting will be presented to a grand jury.

Dunton, 30, is a four-year veteran, who is reportedly "devastated" about the shooting. A police source told the Post, "He is heartbroken, distraught and upset. He sent his condolences [to Edwards' family] saying how sorry he was. He's devastated because he left behind a family without a father."

Edwards was 25 and leaves behind a wife and two young children. His father said his son dreamed of being a police officer, "When he was a small boy, he would go over to the 71st Precinct just to be around the police... He fell in love with the NYPD from the very beginning -- all his life he loved the police."

The Daily News' Errol Louis has a column today, titled, "You never read this headline: 'Black cop shoots white cop'": "Many will assume that the killing of Officer Omar Edwards was the result of a tragic but honest mistake, an accident with no malice or racial bias at work. That would be a reasonable conclusion - and a dead wrong one." A Post editorial cautions against looking at the incident through "race-colored glasses," but does write, "Benefit of the doubt in these cases -- at least initially -- should almost always go to the firing officer, who needs to make a life-or-death decision in little more than a split second...Yet the NYPD has strict guidelines both for the use of deadly force and for confrontations between officers when at least one is in civilian clothing. Department investigators need to find out whether those were followed -- and if not, why not."