Fatal Bar Brawl in the Bronx Over Free Beer 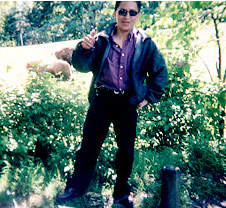 A fight at a Bronx tavern left an Ecuadoran construction worker dead and his brother injured. Jose Tenemasa was stabbed to death at Le Taverna De Izucar on 172nd Street in the Bronx on Friday night. His brother Carlos said that another group of bar patrons asked them to buy a round of beers, which they did. But when they refused to buy another round, the men got angry. From the Daily News:

A fight broke out about 12:20 a.m., and Carlos Tenemasa said he was cornered as his brother sat at the bar. Tenemasa said he snapped a pool stick in two and prepared to fend off his attackers when one cracked him over the head with a beer bottle. He ran from the building with blood pouring down his face, he said.

Tenemasa said he went back inside a few minutes later and found his older brother on the floor.

The police are looking for the three attackers. Jose Tenemasa was supporting his wife and five children left in Ecuador; Carlos, who needed over 20 stitches for his wounds, told the Post, "I need to call, but I don't know how. I need to make it easy, because it will make things crazy over there."