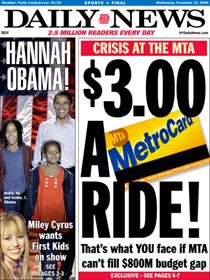 The MTA's scary financial situation has now given birth to a Daily News cover broadcasting a $3 fare hike possibility! Of course, it's only a possibility--that's probably why it shares space with news that the Obama daughters were invited to appear on Hannah Montana.

However, the Straphangers Campaign's Gene Russianoff tells the News if there's no state bailout, "We could be looking at the mother of all fare hikes. This whopping increase would likely be coupled with very serious service cuts. In plain English, it could be lots more out of your pocket for the joy of more crowding, longer waits and less reliable service." Yeah--even more crowding, waits, and less reliable service--chew on that!

The subway and bus fare is being eyed because its fare hasn't been raised since 2003 (see this chart from the News--and yes, unlimited Metrocards and Metrocard discounts have changed). As for reaction from Mayor Bloomberg, he said, "It is a state agency... I have four votes on [the MTA board], but, you know, fundamentally, the governor has to come up with a plan, and anything we can do to help, short of putting in money, which we don't have, we'll be happy to do." Keep in mind, Bloomberg recently announced a possible 15% income tax hike.