Fans Gather at Garden to Give Isiah a Pink Slip 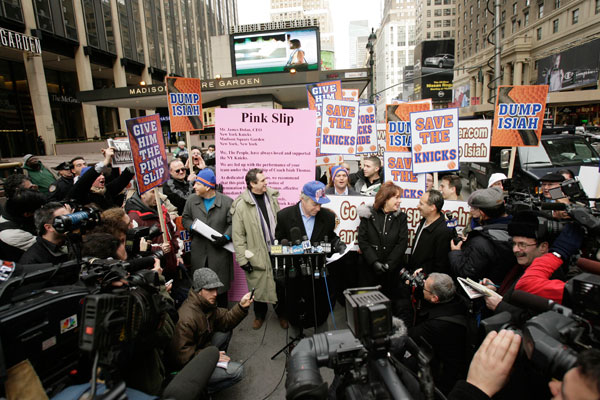 Isiah Thomas may want two weeks to save his job, but for most fans have had enough. A group of fans delivered an eight-foot-high pink slip to the steps of Madison Square Garden yesterday calling on Jim Dolan to fire Thomas. And, the “Fire Isiah” chants were heard inside the building last night, despite the team winning easily over the Cavaliers.

Even Steve Mills, President of MSG and the man responsible for hiring Isiah, has reportedly soured on Thomas and wants him fired. If that's not enough, Thomas’ former coach, Hall of Famer Chuck Daly is questioning whether or not Isiah should stay behind the bench.

None of this matters until Jim Dolan decides he has had enough of Thomas. Dolan is supposedly reluctant to fire Thomas after extending his contract in March. But, instead of firing him what if he marginalized him? Thomas can stay as President of the Knicks, but bring in a real GM and coach. Then it is up to Isiah whether he wants to walk away and the fans can start believing in their team again. That would truly be a holiday miracle.

Photo of the pink slip fan protest by AP/Seth Wenig

#basketball
#Chuck
#Daly
#fire
#Fire Isiah
#isiah thomas
#jim dolan
#knicks
#madison square
#madison square garden
#msg
#Seth Wenig
#sports
Do you know the scoop? Comment below or Send us a Tip
A new Gothamist is coming! We’ve moved comments over to our beta site. Click here to join the conversation and get a preview of our new website.