Famous Playwright Mysteriously Slashed In The Neck In Fort Greene

A Tony award-winning playwright was slashed in the neck by an unknown assailant on Sunday night in Fort Greene, and left a massive blood trail as he walked to Brooklyn Hospital. David Henry Hwang, who scored the award for his 1988 play M. Butterfly, was on South Portland Street between Lafayette and DeKalb avenues when someone apparently attacked him. According to Fort Greene Focus, Hwang:

was carrying groceries home at 8:50 p.m. when he felt pain in his neck and realized he was bleeding out. He saw no attacker fleeing, but an artery was cut and he lost a lot of blood. Fortunately, the 58-year-old managed to walk himself over to Brooklyn Hospital in time for help and treatment.

The hospital is three and a half blocks from where Hwang was walking when he was sliced. Speaking to the Daily News, he praised the doctors who treated him.

"Thanks to the excellent work of the doctors at Brooklyn Hospital and Mount Sinai, I'm now home and expected to make a full recovery," he said. 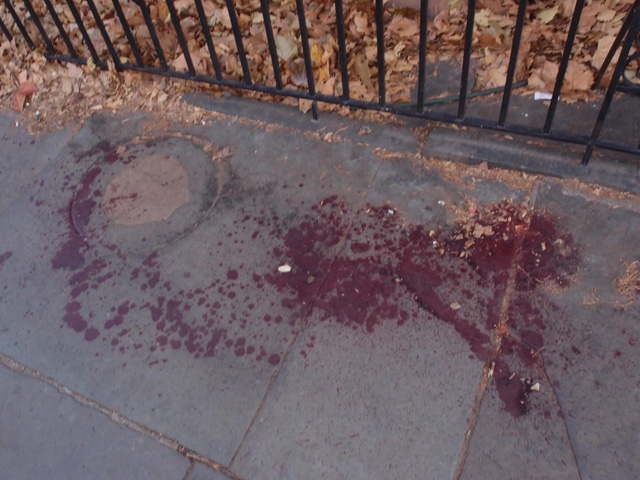 Blood on the sidewalk at South Portland Street and Lafayette Avenue. (Photo by Chris Cobb)

One local resident emailed us the above photo on the morning after the slashing, saying, "There is a giant amount of blood all over the sidewalk in Fort Greene on South Portland and Lafayette, kitty-corner from the popular local bar called Mo's... It kind of looks like someone was attacked, walked 10 feet then collapsed. As of 9:45 there is still a ten foot stretch of blood covered sidewalk no one has thought to clean up."

Hwang teaches at Columbia University, and according to his bio for the school, he is a three-time Tony nominee, a three-time OBIE Award winner, and a two-time Pulitzer Prize finalist. In 2013, his play Yellow Face was adapted into a movie for YouTube, executive produced by Fast & Furious director Justin Lin.

A police spokeswoman said cops are investigating and no arrests have been made.

#brooklyn hospital
#david henry hwang
#fort greene
#nypd
#slashing
Do you know the scoop? Comment below or Send us a Tip