Attendees at a City Council hearing were driven to tears yesterday when Park Slope mother Amy Cohen advocated for legislation to reduce speeds in residential communities, over three weeks after her 12-year-old son was fatally struck by a commercial van in the neighborhood. 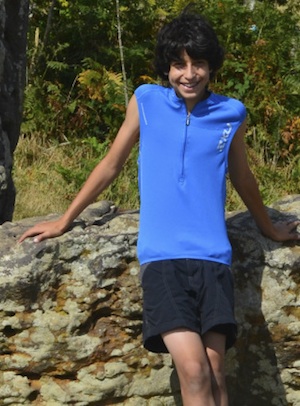 Cohen spoke in front of the Council’s Transportation Committee, testifying about the horrifying crash that took son Samuel Cohen-Eckstein from her on October 8th. "Our family has suffered an unspeakable loss. Every day is filled with pain so deep we are not sure we can bear it," she said. She noted that Samuel, who was on the street at Prospect Park West to retrieve an errant soccer ball when he was hit, was crossing at the light. "As best we understand it, he crossed into the intersection from Prospect Park West, with the light in his favor, to get a soccer ball," she said. "While he had the light when he entered the intersection, it quickly changed and he slipped and was hit by a van approaching the intersection at full speed."

The bill, initially introduced by Councilman David Greenfield in 2011, aims to reduce driving speeds from 30 to 20 miles per hour on residential side streets that are less than sixty feet wide; similar laws have been passed in London, Paris, and Tokyo. A recent speeding report obtained by the Daily News noted that officers in the area didn't write any speeding tickets in the month of September. "We cannot keep this city safe for pedestrians and other motorists with only speed bumps,” Councilman James Vacca, who professed he will remember Cohen's testimony "for the rest of my life," said. “We need police out on the streets to nip this in the bud.”

Despite Cohen's moving testimony—WNYC noted there was "not a dry eye in the room" after the grieving mother spoke—the legislation has some opposition. "Although we applaud the intent of the bill, the Committee for Taxi Safety [believes the] bill needs further review and discussion. This bill will not allow us to build on gains in traffic safety," taxi lobbyist David Pollack testified. "The bill does not define with sufficient clarity what is a residential neighborhood. In addition, we're concerned the proposed bill would become another excuse for NYPD traffic enforcement officials and TLC enforcement agents to use fines to justify financial goals." Though Greenfield rebuffed that testimony, noting Pollack's committee was not focused on street safety so much as "focused on the perspective of the owner or driver."

In addition to Cohen, Samuel's father, Gary Eckstein, also spoke at the hearing, noting that while the legislation couldn't bring his son, who was supposed to celebrate his becoming a bar mitzvah this month, back, "it could save other lives." He also noted that his wife tracked a number of cars in the neighborhood using a speed gun this week, and found 25 cars traveling above the speed limit on Prospect Park West. And Samuel's 14-year-old sister Tamar read the eulogy she wrote for his funeral. "At camp this summer, for the first time in our lives we were separated for four weeks,” she said. “It was very hard. I kept expecting that you would be there and you weren’t. ... Now I am going to have to live my whole life like that."

A spokesman for Bill de Blasio says the mayoral candidate supports the legislation; Joe Lhota has reportedly voiced some support as well.

#amy cohen
#James Vacca
#park slope
#pedestrian fatality
#Samuel Cohen-Eckstein
#speeding
Do you know the scoop? Comment below or Send us a Tip