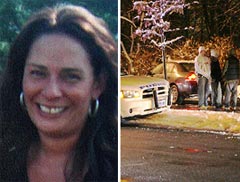 The family of Judy Bucherri are wondering why she threw herself from a speeding SUV to her death on Friday night. Bucherri had been in the car with her boyfriend Sandy Levine, who was later charged with DUI and marijuana possession (the cops found a pound of pot in the car), and inexplicably, she jumped out.

Levine claimed they had been arguing over where to go (he wanted dinner, she wanted to go to a bar), but Bucherri's sister told Newsday, "Why would she jump out of a car? She had so much to live for. What was going on?" The sister added that Bucherri held two jobs to help support her kids, "She sacrificed her whole life for them."

The authorities do not believe Levine, who saved a person from the subway tracks in 1994, pushed Bucherri, but the Daily News heard from Bucherri's estranged husband. Thomas Bucherri said, "I know [Levine] should have at least pulled over. She didn't just jump out of the car," and accused Levine of stalking his estranged wife. Levine was bereft after his arraignment; according to the News, he said, "It's a tragedy. I wish I was the one laying in the street."

And to the Post, the owner of Callaghan's Eatery and Ale House in Queens, where Bucherri and Levine worked part-time as bartenders, claims that while Levine may have been drunk, Bucherri was "drinking heavily" before getting into Levine's car. The bar owner said, "The amount of intake was enough that we took her keys away."

#dui
#fatal jump
#queens
#speeding
#suv
Do you know the scoop? Comment below or Send us a Tip