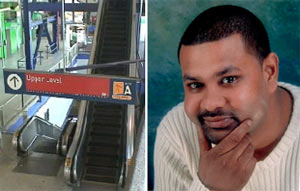 The pregnant wife of the man who fell from a Shea Stadium escalator to his death spoke to reporters outside her Brooklyn home. Antonio Narainasami, said his wife Ambeeka, was "a great father.... He had so much to look forward to."

Newsday reported 14-year-old daughter Emily showed reporters a photograph of her father. Emily, along with her 8-year-old sister and other relatives, saw her father fall and said, "Either he went to turn around to tell me something or to make sure we were behind him, and he just slipped. We screamed for help, me and my uncle."

However, investigators say the 36-year-old was actually "perched on a rail moments before he died," based on witness accounts. A police source told the Post, "Eyewitnesses said he was sitting on the railing and trying to slide down. It looks like he just lost his balance." But his widow, who was at home during the incident, said, "I don't think he would be sliding down on anything."

The escalators at Shea are "customarily turned off in the seventh inning to encourage fans to leave via the long walkways," an official told the Daily News. (Per Newsday, the Yankees say their ramps and escalators are available after the games.) The incident is being investigated not only by the Mets, the City Parks Department and NYPD, but also the US Consumer Product Safety Commission for possible escalator malfunction.

The escalator Narainsami fell from is expected to be in use during today's game, though another escalator he fell onto will likely be closed for repairs.

#escalator fall
#mets
#parks department
#shea stadium
Do you know the scoop? Comment below or Send us a Tip