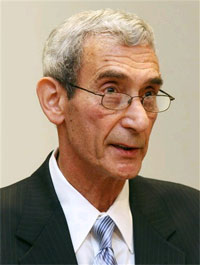 Zadroga's family and the ME's office did not comment about the meeting, with the ME's office spokeswoman saying, "Dr. Hirsch gave his personal assurance to the family that he would keep the details of the meeting private and confidential" and a lawyer for Zadroga's parents saying, "We do not agree with the doctor, but there are two medical examiners who have different opinions."

Previously, a NJ medical examiner ruled that Zadroga's death and respiratory issues were from toxic WTC dust. The NJ ME sent samples to the Department of Defense's Institute of Pathology, which, according to the Daily News, found there was "talc, plastic, calcium phosphate, silica carbon, quartz and cellulose" in Zadroga's lungs. Which leads Detectives' Endowment Association president Mike Palladino to wonder, "It can't just be a coincidence that Detective Zadroga had in his lungs exactly what was in the toxic mixture down at Ground Zero."

An advocate for sick 9/11 responders, John Feal of the FealGood Foundation, said he spoke to Zadroga's parents and said that Joseph Zadroga was "irate." The Daily News has an editorial demanding more answers from Hirsch while the Post's editorial points out the ME's office did rule one woman's death was caused by WTC dust.