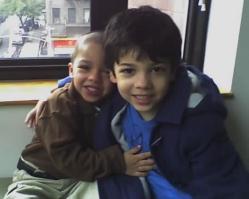 Yesterday, a funeral was held for three-year-old Kyle Smith, who died under the care and apparent abuse of family friends. Family members, friends and neighbors shed tears and voiced regrets over the child's death.

Kyle's mother, Eugenia Holmes, carried a photograph of her son. Last year, while battling drug addiction, Holmes had agreed to let her friend Nymeem Cheatham take Kyle in. After his battered body was examined by the medical examiner's office two weeks ago, prosecutors accused Cheatham and her boyfriend Lemar Martin of beating and sodomizing him, after an autopsy found a torn tongue, broken bones, and much more.

The pastor who led the funeral service said, "A lot of time in life we say that the person that's done something terrible is insane... Most of the people who do bad things are evil. In this case, it was extremely so."

The NY Times devoted a lengthy article to Smith's sad, short life and the regrets and blame being thrown in the aftermath. Child welfare advocates believe his father who could have taken Kyle back was confused by the process, neighbors recalled seeing Cheatham verbally abuse Kyle and dress him inappropriately (summer clothes in winter weather, long shirt during the heat wave) yet never said anything, and there was no way to find out that Cheatham's biological children had been taken away from her.

Photograph of Kyle Smith, on the left, with his older brother Darien; the NY Times reported Darien stood "in the back of the church" and held "a single balloon with white doves and hearts."

#abuse
#ACS
#child abuse
#crime
#funeral
#Kyle Smith
#tragedy
Do you know the scoop? Comment below or Send us a Tip
A new Gothamist is coming! We’ve moved comments over to our beta site. Click here to join the conversation and get a preview of our new website.