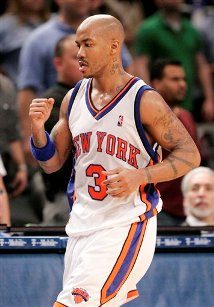 A day after the tragic death of Stephon Marbury's father Donald, some more details have come to light regarding his final moments. Knicks officials insist that Stephon's family asked the team not to notify him of his father's condition until after the game. Apparently this was not the first time Donald Marbury had suffered from chest pains like these.

Donald was taken from The Garden right before the third quarter began, but the team only learned that he had died at the hospital after the game had ended. Family friend Gaylord Worrell notified Marbury and Coach Thomas moments after the final buzzer sounded.

Zach Randolph was the only Knick player to comment to the media on their point guard's loss. Randolph recently dealt with the death of his Grandmother, to whom he was very close. He acknowledged that Steph has had a tough season so far, between the fans booing, the Knicks record and the deaths of two others that were close to him. While rest of the team had not all been on the best of terms with their captain since he left the team in Phoenix last month, Randolph pledged that the entire team will attend the funeral.

Stephon has not been particularly outspoken to the media following his personal tragedy, but he did email The Post, stating, "I walk by faith and not by sight. JESUS lives in me, and he will guide me through this. This (too) shall pass." Funeral arrangements have not yet been set.

#basketball
#best of
#Coach Thomas
#Don Marbury
#hospital
#knicks
#media
#phoenix
#sports
#stephon marbury
#the game
#the garden
#the post
#tragedy
#Zach Randolph
Do you know the scoop? Comment below or Send us a Tip
A new Gothamist is coming! We’ve moved comments over to our beta site. Click here to join the conversation and get a preview of our new website.