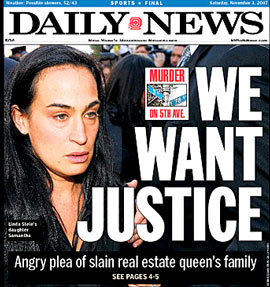 Hundreds gathered for the funeral of Linda Stein, who once managed musicians like the Ramones and later became a real estate broker "to the stars." Stein was found bludgeoned in her Fifth Avenue apartment on Tuesday, and her daughter Samantha Stein-Wells made tearfully shared a promise she and sister Mandy Stein made, "I had to see her one last time. One last time to see what this bastard had done to her. And we stood there and we promised that justice will be served. We won't stop until justice is served."

Stein-Wells also revealed that her mother was so brutally killed that it took morticians "three hours to prepare her body. Usually it takes one hour." Police have taken evidence from Stein's apartment and DNA samples from construction workers at the building, as well as interviewed a number of her associates. So far, the police do not have any "leading suspects." A source told the NY Times that though many people were questioned, "If it was a horse race, no one horse is ahead of the others." Another friend suggested that the police should have gone to the funeral, held at Riverside Memorial Chapel, "It was probably someone who knew her, so this is where they should start."

Linda Stein was known as a brash, vivacious presence, as she floated from punk and Madonna to helping celebrities like Harrison Ford, Steven Spielberg Sting, and Russell Simmons find homes, as well as a survivor (she had two bouts of cancer). Her daughter Mandy Stein recounted a story of Anthony Kiedis kissing her mom at a party, “She goes, ‘Are you really the “Suck My Kiss” guy?’ And — only would happen to my mom! — he goes, ‘Yeah, you wanna?’ And grabbed her!” And her ex-husband, music mogul Seymour Stein, said, “Linda was a beauty and a great brain, but her greatest asset was her chutzpah.”

Rabbi Emil Hirsch said, "She could have been New York's poster child - tough, gutsy and brilliant. She was of New York, and New York was in her. She was brash on the outside, but like New York, scratch the surface and you'll find a glistening soul."