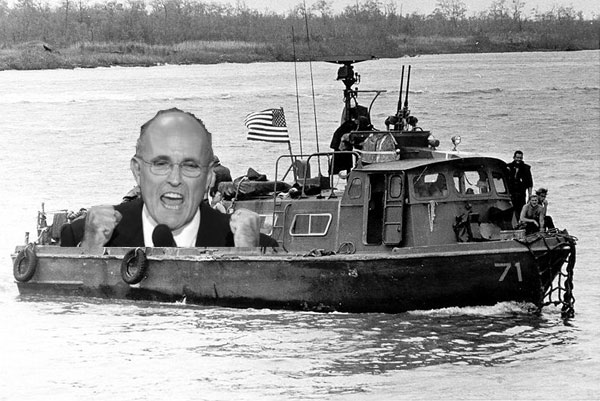 What is Rudy Giuliani getting for the new year? It looks like he's in for some campaign tactics from families representing firefighters that died on 9/11 that The Post is calling "Swift Boat" like. James Riches, a deputy fire chief who's son James Jr., a firefighter who died at Ground Zero, is organizing the campaign against the former mayor. Riches told The Post that things should be "up and running" for January 1st and that "the purpose is going to be to set the record straight about 9/11. Rudy Giuliani is not a hero."

When Gothamist talked to Riches this September, we asked him if his group was going to do anything to let the rest of America know about Giuliani's actions on 9/11. Riches said:

We will protest around the states to let everyone know the Rudy failed to prepare for the WTC attacks. He failed miserably before, during and after 9/11. No drills at WTC from 1993 to 9/11/01. Radios failed in 1993 and again in 2001. Command center at 7 WTC. No unified command, No interoperable radios FD and PD. 911 operators telling people in South Tower to stay put even before plane hit South Tower, yet FD commanders at scene were calling for its evacuation. Lying about quality of air, and not obtaining proper face fitted respirators until Nov 2001 leading to 70% of 1st responders with 9/11 illnesses while Rudy was too busy to lift a finger to help them because he was making tens of millions of dollars capitalizing off 9/11. His legacy will be thousands of sick and dying first responders.

In the past, Riches also said, "If somebody can tell me what he did on 9/11 that was so good, I’d love to hear it. All he did was give information on the TV. He did nothing. He stood there with a TV reporter and told everyone what was going on. And he got it from everybody else down at the site." Riches was also upset that Giuliani was reading names at Ground Zero.

An official announcement from the group could come as early as tomorrow. In addition to a website, the group hopes to raise up to $1 million to fund mailings and advertising. These firefighters aren't the only ones that are anti-Guiliani, a police union is also against NYC's former mayor.