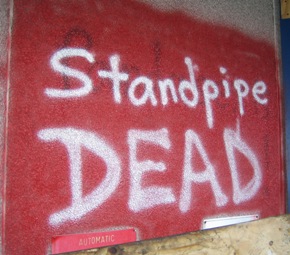 Lawyers for the families of Joseph Graffagnino and Robert Beddia, the two firefighters who died in the August 18 Deutsche Bank fire, have filed notices of claim to sue city and state agencies for up to $180 million. The lawyers are claiming that the "reckless, willful and wanton actions and inactions" of the various agencies, including the FDNY, Port Authority and Lower Manhattan Development Corporation, caused the fatal response to the blaze.

The Deutsche Bank, which was contaminated with dust from the World Trade Center, was being deconstructed by contractors, as per state instruction. The subcontractor removed large pieces of the standpipe, which brings water in cases of fire, but the FDNY didn't know that when arriving at the scene of the seven-alarm fire.

Additionally, the construction crews were apparently smoking in the presence of flammable materials and even the supposedly fire-retardant materials went up in flames, prompting questions about why the John Galt firm (in spite of its shady background) was hired for the job. And there is question as to whether the FDNY kept up inspections of the building and even developed an escape plan.

One notice of claim says, "Routine inspections would have revealed that the premises were a textbook firetrap." Graffagnino's widow Linda told reporters, "This is a first step of a long, long process my family and I are going through to force change in the city and prevent a disaster like this from happening again."