One by one, grieving families and victims stepped up to the microphone. Family members and friends clutched photos of their loved ones, including the parents of three-year-old Allison Liao, and victims defiantly held signs declaring "No Charges Filed." Four young boys stood at the front of the crowd, holding a map displaying the traffic deaths in NYC from 2005 to 2013—a total of 2,566.

Amy Cohen, a founding member of Families for Safe Streets, was the first to address the rally. "In 2013, 294 New Yorkers were killed in traffic. My son, 12-year-old Sammy, just shy of 13, was one of those 294." Cohen's voice wavered as she continued. "It is an incomprehensible loss. Each of those killed has a mother, a father, a sister, a brother, or a spouse. A family member who's life will never be the same."

Data tracked by Streetsblog revealed last week that while there have been 400 pedestrian and cyclist fatalities in three years, only two cases led to a DA filing any homicide charges against drivers—motorists are rarely criminally charged if they fatally strike or injure someone and there's not one or more aggravating factors involved (such as a hit-and-run, intentional hit, or intoxication.)

Photos of Sammy Cohen-Eckstein's grinning face dotted the crowd—the boy was struck after he chased a soccer ball onto the road in Park Slope. At the time, a group of local residents and organizations banded together to support Vision Zero and encourage a drop in the speed limit to 20 miles per hour.

"We will never get to zero fatalities unless we hold dangerous drivers accountable. The five New York City district attorneys have failed to do their jobs. We are here today to tell them that we demand change," said Cohen. 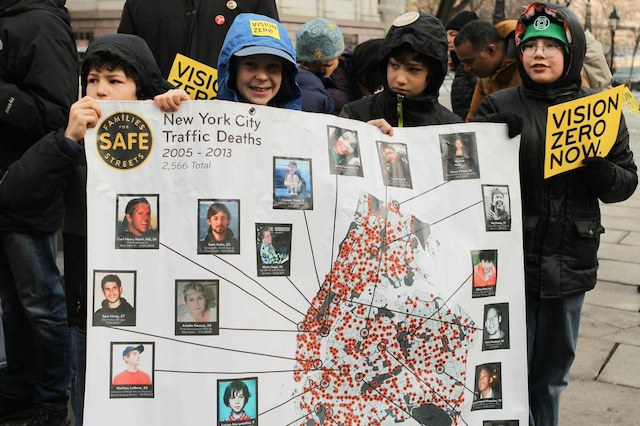 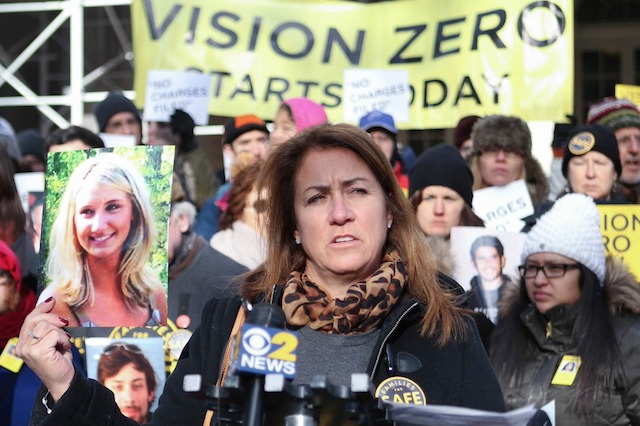 Kelly Gordon was killed after a cab driver sped through a yellow light on the Upper East Side and struck her as she was standing near the corner. Her mother urged New York City's DAs to prosecute reckless drivers yesterday (Ellen Moynihan/ Gothamist)

Another founding member of the group, Dana Lerner, retold her heartbreaking story. Almost exactly a year ago, her 9-year-old son Cooper Stock was killed on the Upper West Side after a cab driver turned into the boy and his father. Manhattan DA Cy Vance Jr. is prosecuting the driver for a traffic violation, not a criminal offense—if convicted, he faces a maximum 15 days in jail. Needless to say, Lerner finds that woefully inadequate.

"He was holding his father's hand and they were walking in the crosswalk. They were obeying the law, but the driver did not when he failed to yield when making a left turn. His recklessness was enough to take my son's life and catapult my husband across West End Avenue," said Lerner. "[Cy Vance] promised to ensure public safety. But my son is dead. If the DAs are indeed the people's prosecutors, why did they forget about an innocent 9-year-old boy named Cooper?"

Cohen said the group would continue to push DAs for prosecutions, one recent case being the November death of Mohammed Naiem Uddin—tragically, a classmate of her own son. Three children from Sammy's school have now been killed on roads.

Friends of Ella Bandes, a 23-year-old who was fatally hit by a bus at the notorious Myrtle-Wyckoff intersection on the border of Bushwick and Ridgewood, spoke to us about the young dancer and artist who had been looking forward to applying to a PhD psychology program. Neither the Brooklyn or Queens DAs pressed charges against the bus driver. 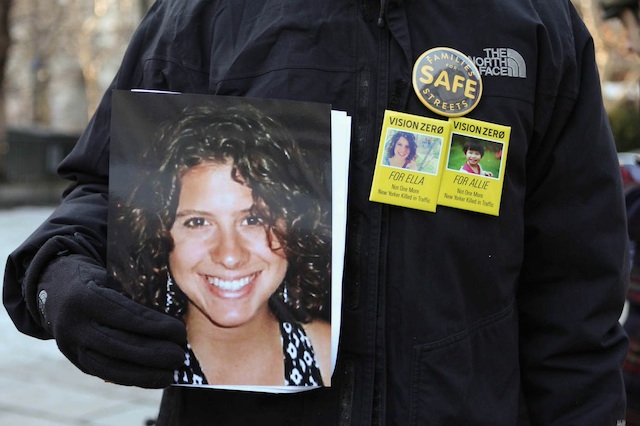 Lindsay Motlin, 28, from Manhattan, was struck at night in December 2013 by a van on Grand Street in Brooklyn while she was standing on a street corner. "I was hit by a speeding van. It was a hit-and-run, and they didn't find him, and the DA didn't press charges." One year and three operations later, she's still expecting to undergo more surgery after injuring her shoulder, pelvis and leg.

Jeffrey Heller, 59, another Manhattan resident, was cycling in Brooklyn when he was struck by an SUV in October 2014. "I was wearing this jacket," Heller said, motioning to his fluorescent orange attire. "I had a helmet that had a flashing strobe on the front. I waved my arms, and yelled 'Stop, stop, stop' - and [the driver] didn't deviate her course, didn't slow down... I moved to the right fast enough to avoid being killed, but not fast enough to avoid having my leg broken."

In a statement released last week, the Executive Director of Transportation Alternatives, Paul Steely White, said the group would be one of many pushing to make reckless driving a key issue in the coming months. "The D.A.s in the Bronx, Queens and Staten Island are seeking re-election next year, and T.A. will press the issue of driver accountability with all the candidates," said White.

#pedestrian fatalities
#pedestrian safety
#vision zero
#original
Do you know the scoop? Comment below or Send us a Tip