When Sarah Foster, a 27-year-old middle school teacher, was run over and killed by the driver of an oil truck last month in a Murray Hill crosswalk, those who knew her said the anguish didn’t stop with news that she had died on her way to work. For one close friend and co-worker, the pain was multiplied upon reading about the crash in the paper.

The New York Post quoted unnamed police sources and witnesses as saying Foster was wearing a hood and headphones when she was struck, a claim that her colleague read as insinuating Foster was, in some way, at fault for her own death.

“Yesterday was the hardest day I’ve ever had as an educator,” said the teacher the day after Foster died, requesting anonymity out of concern for their students’ privacy. “Seeing some of the articles that seem to place blame on her are truly upsetting to read.”

While the police and witness accounts weren't wrong in Foster's case, advocates, attorneys, trauma experts, and mourning families say by shifting focus away from drivers and onto those they’ve killed, this kind of language in news reports can compound grief in the wake of traffic deaths. And the problem is only worsened in cases where accounts from unnamed police sources are later disproven.

Danielle Davis knows this all too well. In 2016, her sister Lauren was killed by a driver while bicycling to work on Classon Avenue in Brooklyn. Unnamed police sources told the press that Lauren was biking against traffic. It took the Davis family months of work, canvassing for witnesses and filing Freedom of Information Act requests with the police department, before the official account was corrected: Lauren was, in fact, riding with traffic.

The police “were so willing to write down information that reinforced their own narrative—was it the easy way out?” Davis says. “I just know that my sister was dead, and she was rendered even more invisible by the police not putting the time and energy into trying to figure out what happened. That was incredibly hurtful.” (To this day, the story about her sister’s death on the New York Post’s website contains the wrong account of Lauren biking against traffic.)

“It’s just horrible, because it’s a revictimization,” says Amy Tam-Liao, whose 3-year-old daughter, Allison, was killed by a driver while crossing a Flushing street with her grandmother in 2013. Despite initial reports that Allison darted out into traffic—“it was even the title of the article” in the Daily News, Tam-Liao notes—video evidence proved that Allison was holding her grandmother’s hand, crossing with the right-of-way, at the time of the crash. (According to cached versions of the initial Daily News story, the article was not updated until two years after it was published. No correction notice was included.)

“All this anger goes through you,” Tam-Liao says. “It’s heartbreak upon heartbreak.”

Dr. Elana Newman, research director at the Dart Center for Journalism and Trauma at Columbia University, says that that such reactions are not only understandable but expected.

“When people are trying to grapple with the death itself, hearing blaming language can intensify grief, the feeling of helplessness and being out of control,” Newman says. “It's defamation of character. Not only have they lost this person, but the public presentation of their loved one is false. That would be angering to anybody, I think.”

Attorney Steve Vaccaro represents crash victims and their families, including the Liao family. He says the NYPD’s Office of the Deputy Commissioner for Public Information, or DCPI, has never made an attempt to stanch the leaking of faulty narratives.

“It’s tremendously damaging to the families and there’s no accountability for wrong information,” Vaccaro says. “I’ve never seen DCPI take the very simple, humane step of issuing a memorandum or directive for officers responding to crash scenes that they are not supposed to make any statements to the press when there’s an ongoing investigation.”

Asked for comment, a police spokesperson directed Gothamist to the section of the NYPD Patrol Guide instructing officers not to address the media without first conferring with DCPI. They did not answer questions about whether the department considers anonymous leaks a problem, or if a memo like the one Vaccaro describes has ever been issued.

“We trust the NYPD with life and death and to pursue these investigations,” Vaccaro says. “How are we going to have confidence in police to safeguard information when they feel comfortable coming out with these details?”

Vaccaro thinks the press plays a role as well, saying “a case could be made” that outlets should not report details about crashes still under investigation, or, at the very least, be required to name their sources. Several journalists who wrote stories containing quotes from later-disproved NYPD sources would not speak on the record, but one former crime reporter at a major New York news outlet insists that there’s nothing nefarious in the way incidents like these are reported.

Julia Dahl, a former crime reporter for the New York Post and CBSNews.com who has written on the difficulties of the beat, says reporters on traffic death cases are often working under editorial pressure. “Everything is deadline—‘we have to get it first,’” Dahl says. “They have to get enough information to run something, so they get the police account of the story and that’s it—maybe a photo from the scene.”

In the rush to publish, Dahl says, “If the police source says at the time, ‘this happened,’ then it turns out down the road that it didn’t, they might write that this was initially reported differently. But I don’t think most publications would go back and change the story.”

Crime reporting has come under fire for relying too heavily, or sometimes completely, on police sources. In a June essay for Popula, former San Francisco Chronicle staff writer Sophie Haigney wrote about the pitfalls of taking cops at their word: “Police have a functional monopoly on information in this beat that seems to me unparalleled across journalism. If the story doesn’t get at something beyond what the police said happened, don’t publish it.” 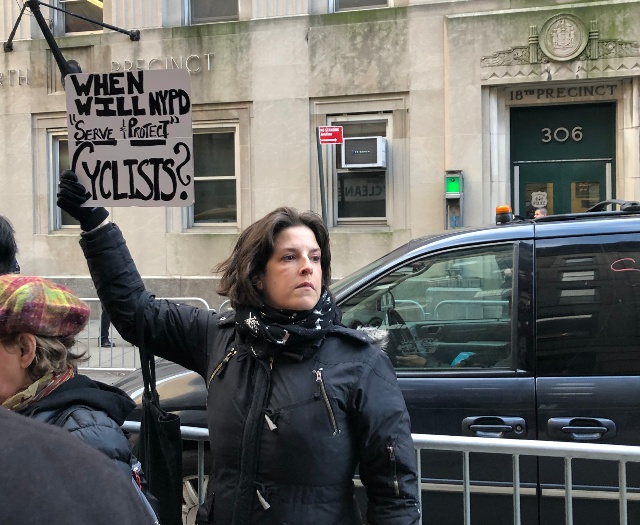 Following the hit-and-run death of Aurilla Lawrence, a 25-year-old bicycle courier, in Williamsburg this month, Brooklyn Borough President Eric Adams took aim at the initial police response in the press, which floated speculation that the driver may not have known they struck anyone.

“The NYPD has an important responsibility to uphold in maintaining the integrity of the crash investigation process,” Adams, who spent 22 years as an NYPD officer, said in a statement. “Comments on the record or anonymously sourced that pre-presume responsibility, intentionally or unintentionally, are damaging to the pursuit of justice.” (Reached for comment, a police spokesperson did not respond to Adams’ statement.)

Amy Cohen agrees. She lost her 12-year-old son, Sammy, in a crash in Park Slope in 2013, just weeks before his bar mitzvah. Some accounts suggested he ran into traffic in pursuit of a ball, a narrative Cohen disputes as fiction. “It tortured me, personally,” she says.

Since Sammy’s death, Cohen has dedicated her life to advocating against traffic violence as the founder of Families for Safe Streets. She sees the ubiquity of false police narratives as a major hurdle in her fight.

“The NYPD and media have failed to do their jobs,” Cohen says. “It has a horrible impact on families, as well as the effort to end this epidemic.”

Cohen is in talks with the police department to produce a training video for new officers on how to properly handle the aftermath of crashes and avoid blaming victims while an investigation is still underway.

The proposed script for the video ends with Tam-Liao making a heartfelt plea directly to police officers, drawn from her family’s long ordeal. “Keep families in mind,” she says. “Keep them in mind when you respond to a crash. Keep them in mind when you compile the facts and complete your investigation. What you do in the moments after a crash will be with a family for a lifetime.”

#crime reporting
#nypd
#traffic accidents
#longform
#original
Do you know the scoop? Comment below or Send us a Tip