A new ad campaign from advocacy group Families for Safe Streets passionately defends the city's Right of Way Law, taking issue with city bus drivers who have recently spoken out against it. Taking effect last August as part of Mayor de Blasio's Vision Zero safety plan, the Right of Way Law makes failing to yield to pedestrians and cyclists a misdemeanor offense. Before last summer, failure to yield classified as a traffic violation, and resulted in a summons and a fine.

In one ad, Debbie and Harold Kahn stand in a crosswalk, holding a sign that reads "Our son would still be alive." Reading further, we learn that "An MTA bus driver killed our son Seth in the crosswalk. He had the right of way, but the driver didn't stop." The fatal accident took place in 2009, and the Kahns believe that if a Right of Way law had been in effect back then, the driver might have been more careful. Of the seven ads, buses loom in two of them. 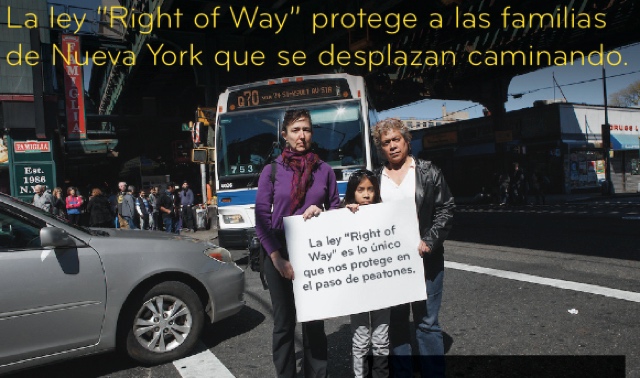 As of mid-March, six of the 22 drivers who have been charged with misdemeanors under the Right of Way law have been MTA bus drivers. The Amalgamated Transit Union has been pushing back, shifting the blame to long shifts and buses with considerable blindspots. At a presentation last week entitled "Hey, You Got The Wrong Guy," Amalgamated Transit Union president Larry Hanley said, "Bus drivers don't design buses, they simply drive them."

Families for Safe Streets member Amy Tam-Liao, whose three-year-old daughter was struck and killed in a Queens crosswalk in 2013, is hardly swayed by Hanley's argument. "The City Council has demonstrated great leadership over the past year with their support of Vision Zero. But now, a special interest group is threatening to erase all the progress the City has made in the effort to end traffic fatalities and serious injuries,” she said in a statement. Tam-Liao's group also points out that eight people were struck and killed by MTA buses in 2014. This year isn't getting off to a great start, either.

Former bus-driver and Councilmember I. Daneek Miller has proposed legislation that would exempt bus drivers from the Right of Way law, and that bill is still in committee.