An awful tragedy unfolded on a New Jersey street yesterday: A bus driver, who was on his cellphone, crashed into a lamppost in West New York—and the lamppost then fell on an eight-month-old girl in a stroller, killing her. The baby had been with her mother, who was in shock. A witness said, "I saw the lady, ‘My baby!’ She was crying, her baby, her baby, and the first responding police officer went again back to her, and right there the ambulance came and they took her into the ambulance." 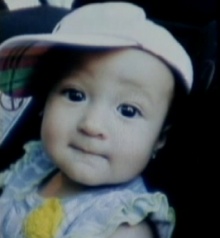 A West New York police officer, Mike Stetson, tried to revive the baby, identified by friends as Angelas Paredes, "As I approached the baby it was unresponsive. I felt it. It wasn't breathing. I started to give it CPR. It started to breathe a little bit," but she was pronounced dead from massive head injuries at Jersey City Medical Center. A woman who overheard the screaming and then looked at the scene told the Post, "The mother was crying. She threw herself to the ground. The baby’s head was so bloody."

The bus driver, Idowu Daromola, was arrested and charged with reckless driving, death by auto, and operating a motor vehicle while using a cell phone. Hudson County Sheriff Frank Schillari said, "We don't know if he was texting or talking on the phone. This is what distracted him we feel and he lost control of the bus." And he said of the baby's death, "The pole fell on the carriage, crushing the baby. It’s a terrible tragedy." The mother and baby had been walking along the promenade, which has views of the Manhattan skyline.

Daromola had apparently crashed into other vehicles and a tree as well as hitting the lamppost. Four passengers on the bus were injured. According to the Record, "Also, warrants previously had been issued for Daramola by municipal courts for two outstanding traffic tickets, Makarski said." Daromola is being held on $250,000 bail.

The bus is operated by Sphinx Transit, which hasn't commented yet.