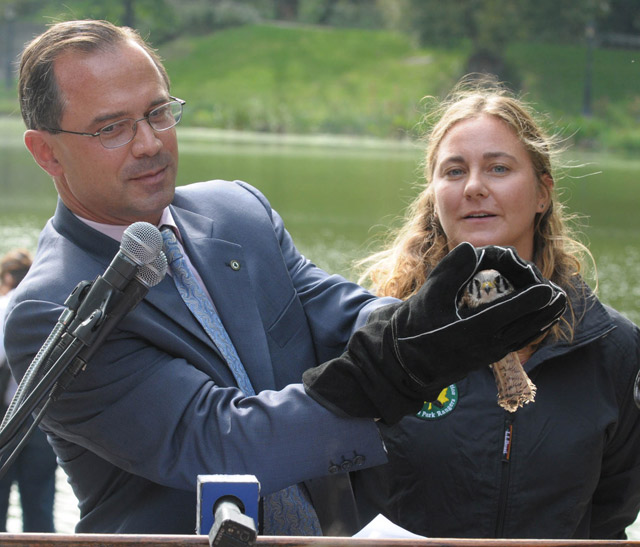 Adrian Benepe may be the Parks Commissioner 364 days out of the year, but yesterday in Central Park he was The Falconer. That's him in the above photo holding a young female American kestrel, which was (illegally) taken in as a pet in Brooklyn before she was discovered by wildlife rehabilitators a few weeks ago. Moments after this photo was taken, Benepe fought off the urge to crush the raptor between his gloved hands, releasing it into the wild instead.

Yes, the wild of New York City; there are approximately twenty falcon nests spread out around town, many of them in the Bronx. Sarah Aucoin, director of the Urban Park Rangers, tells the Post, "New York City is a great place for kestrels," because they make nests in the crevices of buildings and feed on mice and insects in the parks. The kestrel released yesterday had been nursed back to health at an upstate home for troubled children that's supervised by a wildlife expert.

The press conference was called to announce Sunday's 11th Annual Falconry Extravaganza, set to take place between 1:00 p.m. and 3:00 p.m. in Central Park's East Meadow. At the 'ganza you'll have the chance to view flight demonstrations by eagles, kestrels, and hawks, and "get up close and personal with 13 different species of birds," according to a statement from the Parks Department.