DEA agents arrested 90 people and seized a massive amount of synthetic marijuana and bath salts as part of the first-ever nationwide crackdown on disgusting weird "designer drugs." Called "Operation Logjam," (starring Tara Reid?), the joint investigation between the DEA and the U.S. Immigration and Customs Enforcement (ICE) netted $36 million in cash, more than 4.8 million packets of synthetic cannabinoids (a.k.a. K2, Spice), as well as 167,000 packets of synthetic cathinones (a.k.a. bath salts). Investigators also seized a mountain of ingredients that could be used to make the crap.

Logjam targeted people responsible for both the production and sale of synthetic drugs often marketed as bath salts, spice, incense, or plant food. Head shop retailers often sell the designer drugs and, according to Attorney General Eric T. Schneiderman's office, they also give tutorials on how to prepare and ingest them. Guess we should probably send this post down the memory hole before the DEA kicks the door in.

In announcing the busts, the DEA notes that "while many of the designer drugs being marketed today that were seized as part of Operation Log Jam are not specifically prohibited in the Controlled Substances Act (CSA), the Controlled Substance Analogue Enforcement Act of 1986 (AEA) allows these drugs to be treated as controlled substances if they are proven to be chemically and/or pharmacologically similar to a Schedule I or Schedule II controlled substance." In other words, if it looks like a joint and tries to mimic the effects of a joint, it's probably a joint in the eyes of the DEA. They hate joints. Just look at all the logs they jammed: 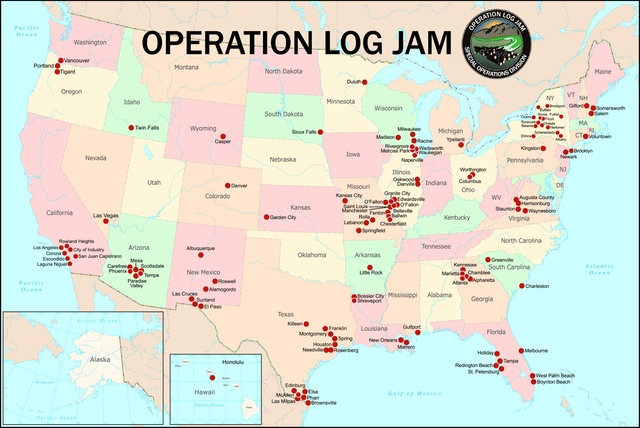 Here in New York State, A.G. Schneiderman simultaneously announced a crackdown on two Rochester headshop owners, who allegedly sold undercover agents such items as Kratom, Fly Agaric Mushrooms, VOODOO Aromatic Potpourri, and Experience Salvia 150FX. Schneiderman is using the state's Labeling law to crack down on head shops statewide; the law requires all consumer commodities to "identify the name and place of business of the manufacturer, packer, or distributor, the common product name, the net quantity of contents," as well as directions and warnings for use, etc. Obviously, you don't find a lot of those instructions on a packet of "Power Diesel."

The owners of the Rochester shops, called Look Ah Hookah, are being forced to pay a $30,000 fine, and agents seized all the synthetic contraband. And Schneiderman says he's also going after those involved in the illegal sale of nitrous oxide, a.k.a the nitrous mafia. If it means the end of this kind of behavior, we're all for it.

#bath salts
#dea
#drugs
#drugs are bad don't do drugs
#it's video dude
#operation logjam
#synthetic marijuana
Do you know the scoop? Comment below or Send us a Tip