Elected officials are warning immigrants to beware of scammers posing as immigration agents and shaking people down.

Queens Councilman Jimmy Van Bramer rallied with immigrant advocates on Tuesday to spread awareness of a scam that he said a constituent fell victim to. Van Bramer said that on Monday four men wearing Immigration and Customs Enforcement jackets approached a man near his Woodside home, said they were ICE agents, and told him that he had to pay money or be deported. The victim, a Spanish speaker, handed over $250, according to Van Bramer's office.

"We do not know the victim’s immigration status," spokeswoman Ariell Swernoff said. "If he is in fact undocumented, you could understand the trepidation."

An NYPD spokesperson said the department has not received a report of such a scam, and that it encourages victims to report such crimes.

Targeting immigrants is a long-standing form of grift in New York City—"It's sort of a constant thing," Swernoff said—however the New York Attorney General's Office said this morning that it has received an increase in reports of such swindles in recent days. Other types include calls from fake officials threatening deportation and demanding payment over the phone, and fake lawyers, commonly known as notarios, misrepresenting themselves as credentialed and offering legal advice and/or pledging to expedite immigration paperwork.

We asked for numbers on how many reports the AG's Office has received so far this year, and how that compares to comparable periods in the past, and will update if we hear back. 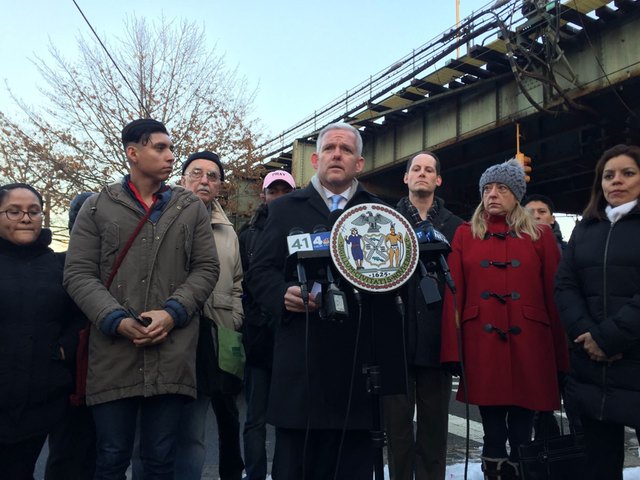 New York City is a so-called sanctuary city, meaning that the NYPD is not supposed to share information with ICE, with the exception of 170 offenses, arrests for which trigger police cooperation. Mayor Bill de Blasio, while vowing that he will oppose Donald Trump's order pledging to defund sanctuary cities, has said he's open to expanding the list of offenses, leading to outcry from activists who say his emphasis on low-level police enforcement is putting undocumented immigrants at risk.

Following a string of ICE arrests nationwide, including roughly 40 in the New York City area, the Department of Homeland Security claimed that it is focusing on undocumented immigrants who "pose a threat to public safety, have been charged with criminal offenses, have committed immigration violations, or have been deported and reentered the country illegally." In other words, they'll take any undocumented immigrants they can get. About 75 percent of the 680 arrested nationwide in the first week of February had prior criminal convictions, though it's not clear the nature of the convictions.

The Attorney General's Office encourages people to report immigration services fraud at (866) 390-2992 or email civil.rights@ag.ny.gov. A primer on immigrants' rights when facing fraud is here.

#attorney general's office
#bill de blasio
#donald trump
#fraud
#ICE
#immigrant services fraud
#immigrants
#impersonating an officer
#jimmy van bramer
#notario
#sanctuary city
Do you know the scoop? Comment below or Send us a Tip
A new Gothamist is coming! We’ve moved comments over to our beta site. Click here to join the conversation and get a preview of our new website.