FAA Makes Changes to Save Area Flights Some Time 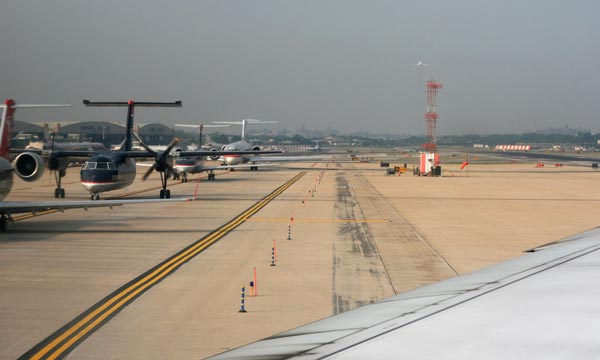 A new plan adopted by the FAA yesterday hopes to decrease delays in airports around the nation by 20%. The focus of the plan is on airports in New York, New Jersey, and Philadelpha, where delays can cause a ripple effect on the rest of the nation's air traffic. The Airspace Redesign Project, as the FAA is calling it, is supposed to modernize the systems in the affected airports (Newark, JFK, LaGuardia, and Philadelphia International) and help prepare for the future. Additionally, the FAA says that the project will reduce noise levels for more than 600,000 people, and reduce fuel burn and emissions by 20% by 2011.

The plan redesigns takeoff and landing patterns, allows for more flexibility to alter paths when there is severe weather, and makes some other changes to the use of the region's airspace. It replaces an air traffic pattern that was designed and implemented in the 1960s and had minor adjustments in the mid-80s. The FAA says that the changes will accommodate growth in the airports as well as enhancing safety and reducing delays.

New Jersey officials immediately issued statements objecting to the change. New Jersey Senators Frank Lautenberg and Robert Menendez issued a statement saying that the changes will reduce delays minimally and that it would actually increase noise for residents. The City of Elizabeth filed suit in federal court to block the plan, claiming that noise levels would increase for 120,000 of its residents.

Not surprisingly, airlines in the area like Jet Blue and Continental support the plan.