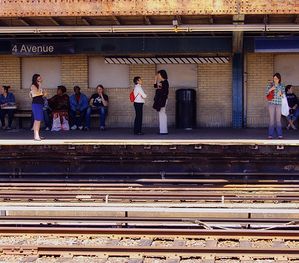 The long-neglected F train station at 4th Avenue and 9th Street in Brooklyn will be refurbished starting in the fall, according to amNY. Built in 1933, the Art Deco station is on the National Register of Historic places, and the north end of the platform offers an impressive view of the Statue of Liberty.

But the station has been falling further into disrepair for years; plywood hides the most neglected attribute, an arched bank of windows looking out on Brooklyn, and the above-ground station’s roof is riddled with holes. The renovation will include a new copper roof to replace the current pock-marked covering, and an aluminum panel exterior. (Curbed has a rendering of the possible future look.) And, the MTA's story goes, there will come a day when the G train will make stops there as it extends to Church Avenue.

The work is part of a $100 million overhaul to the Culver Viaduct – the highest elevated section in the system. The next station closer to Manhattan, Smith and 9th Street, will receive a more dramatic renovation, including structural improvements. The bad news is that the MTA plans to shut that station down for at least a year – something Red Hook residents aren’t too thrilled about. Fittingly, a recently published rendering of the station’s new design evokes a giant aluminum hornet’s nest.