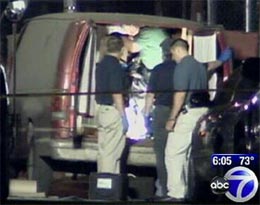 Police suspect that a strange van filled with mysterious explosives found in Sunset Park may be linked to a landlord with a history of bomb-making activities.

On Thursday, a career criminal broke into the van, intending to rob it but decided to tip off the police after moving it to a more desolate location. The NYPD's anti-terror task force responded, as did Police Commissioner Ray Kelly and the FBI, to the scene. WABC 7 reported authorities believe the van is a "forgotten remnant of a closed criminal case."

Brooklyn landlord Yung Tang, who was recently charged with trying to kill a tenant who did not pay rent by setting a bomb under the tenant's car in 2002, had been arrested in Connecticut with "nearly identical bombs" earlier this year. And when the cops searched Tang's house, they found a van full of explosives.

The vehicle seized on Thursday was parked near where Tang once lived with his estranged wife; the Daily News reports, "Investigators think he may have been planning to threaten his wife with explosives." However, Tang has been in a Rhode Island detention facility since and his lawyer said, "My guy has been in jail. What that means, I don't know. It makes an interesting news story, but I think he has the alibi of alibis."