Underneath the Gowanus Expressway, in an area generously included in Sunset Park but really not much more than a detritus-strewn, completely forgotten, and rarely traversed stretch of 3rd Avenue, sit a curious collection of shops, glass windows and brick walls routinely rattled as 18-wheelers hurtle by just 10 feet above. Along on a stretch between 39th and 24th Streets, there are eight of these shops, a rate of nearly one per block. Sunset Video, Video City, Candy Hookah Love, Golden DVD—the names are different, but they're all the same inside.

They're sex shops, like the ones you could once find in Times Square. The kind that advertise private viewing booths for when the laptop is busted and the WiFi is out and the lock on your bedroom is broken and the bathroom is in use and your imagination is unable to conjure up anything and… you get what I'm getting at.

More importantly, how do these places, with a clearly dying business model, sustain themselves? And why did they all wind up so close together?

I spent a week trying to figure it all out.

It's a matter of zoning: In 1998, when the city's new regulations for adult shops went into effect, the businesses were banned from residential areas. This sent many of the shops in Manhattan to areas zoned for commercial and manufacturing, including this part of Sunset Park. There were a number of strip clubs not far off—most of which are now gone—so they had a bit of a seedy community thing going on.

Many of the shops are owned by immigrants from Sri Lanka. Indeed, two stores include Sinhalese in their names. The clerks, too, when I went, were almost exclusively of Sri Lankan descent. The largest Sri Lankan population in the city is in Staten Island, which makes for a quick commute back and forth over the Verrazano.

The owners are elusive: I figured this wasn't like walking into a Starbucks with the expectation of seeing Howard Schultz. These are small, independent businesses, and you'd think at one point in seven days, making regular visits, you'd have one encounter with the head honcho.

Others were circularly evasive.

"He'll be here at 10 tonight," a clerk at Jayoda Video told me on a Monday morning. When I arrived that night, another said he always came in at "10 a.m." The next morning, the clerk from the previous day said he was there last night. 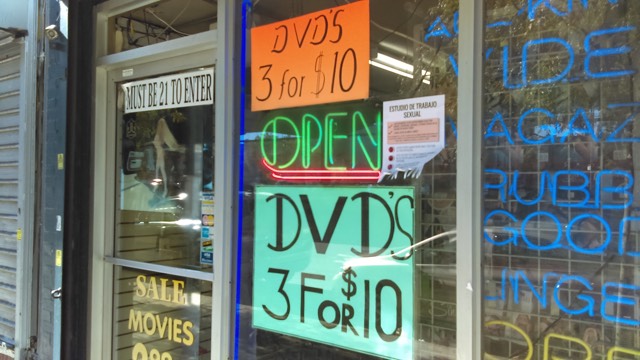 One shop was closed at the appointed hour I was set to meet the owner, despite a sign attesting to its 24-hour nature. On my third trip, the clerk at Golden DVD ("best prices in 3rd Avenue"), said the owner had "just" told him the shop was going out of business "tomorrow," after two days of my hectoring him. It's still open, though I wouldn't be shocked if it did close tomorrow.

With the redevelopment of this area of Sunset Park, these businesses may all soon be gone.

In 2000, when streaming video and online purchasing didn't exist, people couldn't get their porn any other way. The technological innovations of the past 15 years have obviously not been kind to the adult video store industry. At almost every shop, the people I spoke to said they averaged fewer than five paying customers a day. Whether changing hands to avoid paying taxes or rent, or rebranding to be more appealing, the businesses constantly turn over. What was Blue Door Video in 2005 is now Video City. Nilwala Video in 2011 became Candy Hookah Love, with the exact same signage and colors, just a different name.

Customers are few and far between. In the eight shops I visited over seven days, I saw scarcely more than 30 patrons total. I never saw more than one person in a store at a time. Only once did I see a patron make a purchase—a lone DVD at Video City.

Speaking of those booths: They are always "out of order," though nothing seems to be broken. When I asked about the booths in the back, how many people used them, or how they worked, I almost always got the same answer. While each store has a sign out front explicitly advertising booths, the clerks all denied the booths were there. At one shop, after being told there were no booths, I walked back to see the booths, then returned to the counter and said, "I thought said you didn't have them." The clerk continued to forcefully deny they existed. That may have been because because the booths have a reputation as a spot where people can very discretely hook up. I must have seemed like a horny 16-year-old, inquiring whether this was where I get the sex.

You might even think it's strange that other people have moved away from this model of self-gratification. If you masturbated for the longest time in the privacy of a locked room far away from family and roommates, in a spot where no one bothers you, why would you switch to using your own device at home. Why risk dirtying your computer when someone else's screen will do?

What's to be ashamed of? Indeed, the few patrons I saw didn't give me sheepish glances or avert their eyes. The only person who was embarrassed was me. Perhaps there's a lesson in that.

Still, I have no clue how they make rent.

David Covucci is a freelance writer living in Brooklyn.