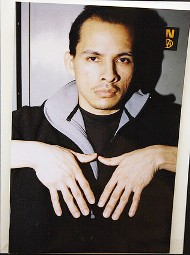 Rodriguez's defense lawyers said the blood was present because he had tried to save her after the girl's mother beat her to death, noting the blood on Nixzmary's clothes were from mother Nixzaliz Santiago, who will have a separate murder trial. Still, a DNA expert explained the blood was in twelve different places.

Taylor Dickerson, who works for the ME's office, also said blood was on a cat litter box Nixzmary was forced to use as a toilet. Of the 46 feces found in the box, 11 were human and one definitely fit the girl's DNA profile, a fact that, according to the Daily News, prompted "one juror to cover her mouth and another to put his head down." Brooklyn assistant district attorney Ama Dwimoh said, "This is really about how she lived, because how she lived is how she died. The fact is, she was tortured."

Attorneys on both sides have been in closed sessions with the judge, discussing the safety of a potential witness (prosecutors want a sealed courtroom, defense lawyers don't). Brooklyn State Supreme Court Justice Priscilla Hall had issued a gag order, but did tells newspapers, "We have been trying to figure that out for the last few days. We have tried and we have not been able to do that."