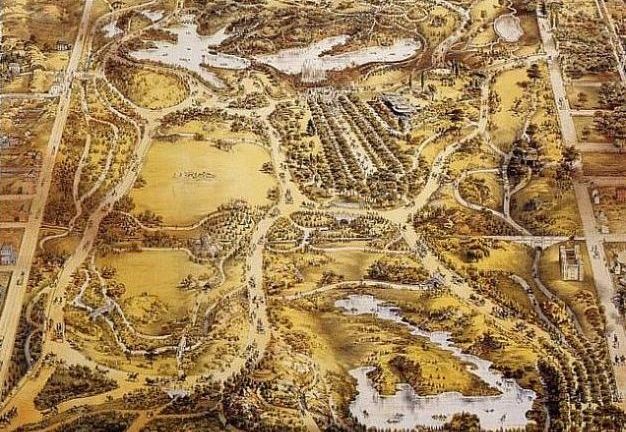 John Bachman’s lithograph of Olmsted and Vaux’s design via Racontours.

150 years ago today the Board of Commissioners of Central Park chose the “Greensward plan” submitted by Frederick Law Olmsted and Calvert Vaux for the design of America’s first major urban public park. Except for the rock outcrops, the park is almost entirely man-made; the meadows were swamps until the designers had them drained and dumped tens of thousands of cartloads of soil to fill them out. And the bodies of water were created using the same water pipes that supplied city residents.

Sara Cedar Miller, author of the book Central Park, An American Masterpiece, says the park is “America’s greatest example of the marriage of aesthetics and engineering. Above ground it is a designed landscape that copies nature so closely that it disguises its own fabrication, and below ground, it is an efficient technological system.”

According to the Central Park Conservancy, the Greensward plan won the competition in large part due to its solution to the problem of four east/west traffic crossings. It was Olmsted and Vaux’s idea to sink the transverse roads out of sight, and this morning the 72nd Street Cross Drive was to be renamed "Olmsted & Vaux Way" during a ceremony at Bethesda Terrace.

Through June 19th the Arsenal on 64th Street and Fifth Avenue is presenting "Celebrating Greensward," a free exhibition of the original large-scale drawings of the architects’ plan, as well as 71 photographs of the park collected over the years. Details here.

#150
#anniversary
#arsenal
#Calvert Vaux
#central park
#design
#exhibit
#frederick law olmsted
#Greensward
Do you know the scoop? Comment below or Send us a Tip
A new Gothamist is coming! We’ve moved comments over to our beta site. Click here to join the conversation and get a preview of our new website.