Over the weekend, some Park Slope cyclists were flummoxed to find a red Subaru Forester parked in the middle of their shiny new bike lane—and incensed by a note someone had taped to the vehicle's rear windshield. "Please be understanding," the note implored. "This car predates the bike lane. It was parked here before the city put in the lane (check the paint)." A photo of the errant vehicle circulated on Cyclist Twitter, along with speculation. Whose car is this? What do they mean, "Predate the bike lane"? Who penned that message? Does this driver really believe they have a right to monopolize public city space?

Since then, we've had a few breaks in the case. The offending vehicle, still stationed on 9th Street, belongs to Women's Health Magazine editor-in-chief Liz Plosser, who has had the displeasure of watching the drama unfold remotely. (Disclosure: I've written for Women's Health.) Plosser and the keys to her Subaru are currently out of town.

"A Brooklyn story," the caption read. "Just learned that our car is parked atop a brand new bike line, which the city created 48 hours after we left town for a week-long vacation (naturally with no warning/signage...). We are sandwiched in and the police and tow trucks are not pleased. Our sweet Subaru has become a community board for neighborhood messages, with grumpy cyclists sounding off, and empathetic passersby showing support." A hashtag indicated that Plosser will return home on Saturday. 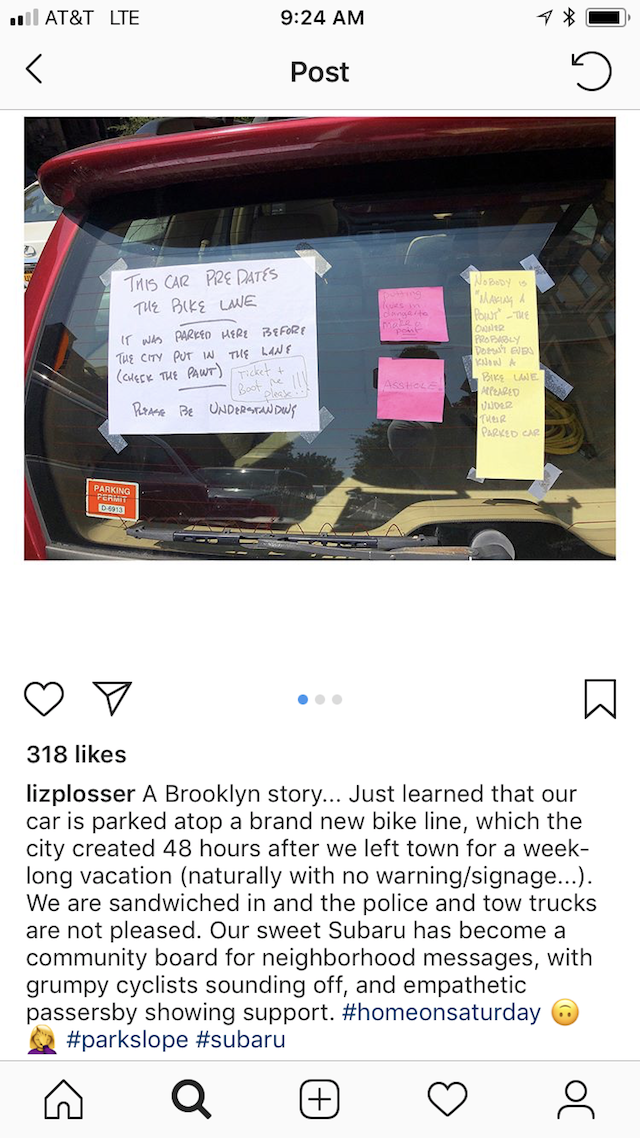 "I never ever would have parked knowingly in a spot where a cyclist lane was going to be created," Plosser told Gothamist Tuesday. "I feel awful about it. I'm a former triathlete, I'm an avid cyclist myself, I hate that we're right now impeding how cyclists are safely moving about the city." Plosser maintains she has no idea who put the first controversial sign on her car, and no idea whether or not it's still up. (Streetsblog reports that someone removed the sign Monday.) Plosser added that she is working with the city to get the car moved before street cleaning on Friday.

According to Plosser, the city had not given residents notice of the bike lane's imminent arrival when she and her family left for vacation on Thursday morning. She'd been out for an early run through her neighborhood and Prospect Park, she explained, and saw no signage announcing the new addition. The New York City Department of Transportation tells Gothamist that "markings at this section were completed on Friday [August 24]. The car should have been moved prior, as DOT posted No Parking signs along 9th Street the day before (right after our 9th Street Press event), and Alternate Side Parking was also in effect that Friday." Plosser says this is news to her: "When I left town on Thursday morning, there were no signs."

On Twitter, some have pointed out that a car owner who leaves town would likely enlist someone to move their car for street cleaning, right? Plosser says she "knew when we left the car that there was a potential that I might get a street cleaning ticket, but it was never my intention to be parked in a bike lane."

How do you leave New York for a week without getting sometime to move your car for you for street cleaning?!

Not only is it illegal to stop, stand, or park in a New York City bike lane, it's also dangerous: Fatal accidents have resulted when rule-breaking cars force bikes into traffic.

"I'm all for cyclists and safe transportation, so this is a big misunderstanding," Plosser says.

The content of the note itself continues to rankle internet commenters, though, and remains the final stone unturned in what cyclist injury lawyer Adam White described to Gothamist as "a little Park Slope mystery": Who wrote it? And "why not post a sign that says 'we will move the car as soon as we return, thanks for understanding,'" as another person pointed out.

Why not post a sign that says "we will move the car as soon as we return, thanks for understanding"? This just looks like a "We ain't going nowhere" proclamation without the context, like some form of civil disobedience for the oppressed NYC car owners.

Plosser emphasized that she does not view this small slice of pavement as her parking right, and that she is working to resolve the situation. Stay tuned for updates to this still-developing story as we get them.

#bike lane
#bike lanes
#bike nyc
#cyclists
#drama
#original
Do you know the scoop? Comment below or Send us a Tip