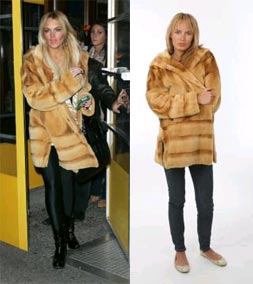 Temper your envy of the fabulous going to private parties at exclusive clubs, because this tale of a coat gone missing, seemingly by the hands of a certain Hollywood starlet, boils down to one fact: Meatpacking District lounge 1 Oak has a "common bin" for jackets.

Columbia student Masha Markova tells the Post how her precious mink coat was lost during a party "for a friend of jet-setting playboy Stavros Niarchos.":

...at one point, she was seated next to [Lindsay] Lohan, and recalled putting the mink in a common bin with other jackets.

It was gone when she prepared to leave 1Oak after an hour, Markova said.

Two weeks later, Markova flipped through the Feb. 11 edition of OK! Magazine and couldn't believe her eyes - Lohan was photographed the night of Jan. 26 wearing the very same fur coat.

Ha--the paparazzi, good for something! Markova, who found many pictures of Lohan wearing her coat, contacted 1 Oak, but the club didn't get back to her for several days. So Markova had her immigration lawyer contact Lohan's lawyer, which then brought a call from 1 Oak: "They were very discreet, never mentioned a name or even the word 'coat.' They just said, 'We're going to bring you something.'"

Markova got her coat--"Reeking of cigarettes and booze with a slight tear in the lining"--but still wants Lohan to pay $10,000 for, uh, borrowing the coat for three weeks.

#1 OAK
#common coat bin
#gossip
#Lindsay Lohan
#mink coat
#paparazzi
Do you know the scoop? Comment below or Send us a Tip