Excitement on the Island: Final Debate is Tonight 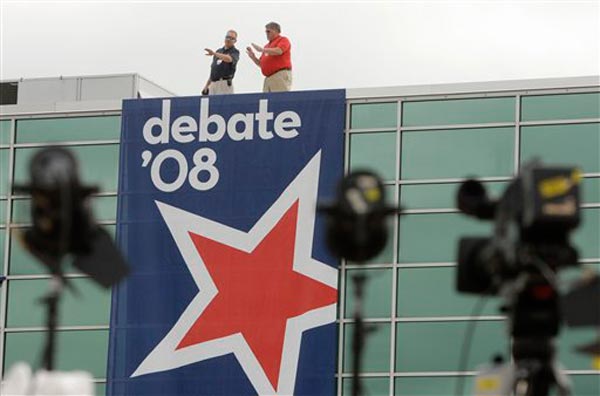 Tonight, the final presidential debate between John McCain and Barack Obama will be held at Hofstra University in Hempstead, Long Island--here's the Debate '08 site. And you know that traffic will be a nightmare.

The school is "agog" over hosting the debate, according to the NY Times. One student said there's a lot of enthusiasm among classmates, “I’ve noticed a level of engagement in classes I haven’t seen before this semester. The debate has really caused people to take a new look at things and think more deeply about these issues.” Which would make the millions spent on having the debate there worth it! Hofstra president Stuart Rabinowitz said, "It is amazing. I mean there are going to be 3,100 journalists here, live telecast back to Ireland, Japan, Singapore."

Newsday is blogging from the school--apparently Abe Lincoln and the Statue of Liberty are making appearances. And for those of you hoping for a better debate, moderator Bob Schieffer of CBS News has indicated he'll hold the candidates accountable if they don't answer the questions.

#debate
#election 2008
#hofstra
#presidential debate
Do you know the scoop? Comment below or Send us a Tip