NY State Police are still investigating the fatal upstate crash that claimed the lives of two off-duty police officers, including a groom on his wedding day, but a preliminary analysis of the scene suggests the driver was speeding.

"It was a violent impact, obviously, there was rollover involved," NY State Police Major Pierce Gallagher told reporters, describing the crash in the Ulster County town of Shandaken. "So yes, the speed was probably excessive for that roadway, it's a 40 mph county roadway."

John Martinez, an officer assigned to the 84th Precinct, was driving a rented 2018 Maserati with groom Michael Colangelo and another man as passengers. Colangelo's wedding had been at Full Moon Resort in Big Indian, NY, and at 11:20 p.m., the NY Daily News reports, "the two men, who both worked in the NYPD's Special Operations Division, jumped in" the car, leaving the resort "onto Oliverea Road, and never came back."

"As far as we can tell they were taking this car out for a ride," Gallagher said.

Resident Gregory Zaff told the NY Post that "his wife heard the car’s screeching tires as it zoomed past their house several times — going back and forth to the Full Moon Resort, where the wedding reception had just taken place — before the collision."

He explained, "The road comes up and banks to the left, they lost contact and kept going straight off the right side of the road. They hit that big maple there, flipped in the air 75 to 100 feet [away] and landed upside down over here in the river."

Police pronounced Martinez, 39, and Colangelo, 31, dead at the scene. NY State Police say they were not wearing seat belts. The other passenger, 28, who was wearing a seat belt, survived and was taken to Albany Medical Center. He has not been publicly identified. 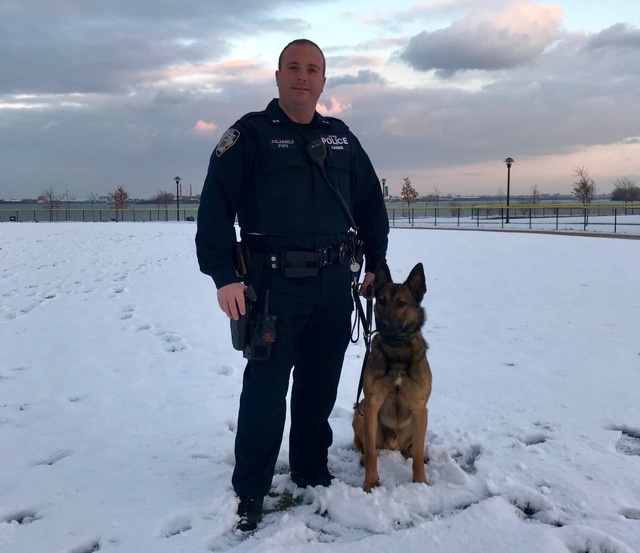 Photograph of Officer Colaneglo and his K9 Jimbo (NYPD)

Zaff said Colangelo's family went to the crash scene that night: "The worst part was the groom’s father. They held him back about a block up the road here. He was screaming and banging on the cars like a madman for five or 10 minutes... It was terrible to listen to him wail. They had to sedate him."

Colangelo had just married Katherine Berger, a nurse at Mercy Medical Center who was "grief-stricken," according to Gallagher. The couple lived in Huntington Station, Long Island, and neighbor Patty Orzini said to Newsday, "He would always lend a helping hand when he saw when I was doing yard work and needed a little muscle."

Another neighbor, Ray Spatafora, mentioned Colangelo's beloved partner, his K9 dog Jimbo, "He’d walk the dog around the neighborhood every day and say hello to everybody. He was a real good neighbor and a real good guy."

#NYPD ESU K9 Jimbo is confident that with this outfit he has the Ugly Christmas Sweater Contest all wrapped up. #UglySweaterDay pic.twitter.com/LrGfLkV6dX

#NYPD ESU K9 Officer Colangelo & his partner Jimbo are seen here participating in explosive detection training. Upon successful completion of the 12 week training, Jimbo will be certified as a Explosive Detection Canine(EDC). pic.twitter.com/XwLOYrG29D

Martinez was a 17-year veteran and had two children.