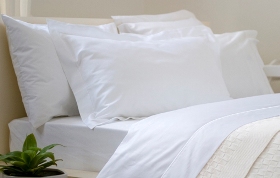 Prosecutors having intimate relationships with defense lawyers happens on TV shows all the time, but a real life drama is playing out in Brooklyn. Former prosecutor Sandra Fernandez, accused of using her position in the Brooklyn DA's office to give information to her defense lawyer fiance, was arraigned on 12 counts of criminal charges.

Fernandez allegedly ran criminal history and motor vehicle checks on three prosecution witnesses in cases handled by fiance - and now husband - Douglas Rankin. Things went down when, per the Daily News, "Rankin waved the printout obtained by Fernandez in court in an effort to undercut the witness in a case about a shootout in Bedford-Stuyvesant." Rankin's client was acquitted. The Brooklyn DA's office fired Fernandez in February.

Facing up to fours year in prison, Fernandez was released without bail. At the hearing, Rankin was heard muttering to himself, saying, "The answer is no. The answer is no," when a judge asked Fernandez is she wanted the case to be presented to a grand jury. The Post reports Fernandez's own lawyer replied in the negative.

Because the case involves the Brooklyn DA's office, Queens DA Richard Brown is the special prosecutor; Brown said, said, “It is extremely disheartening when a prosecutor charged with upholding the law is accused of violating the law. The defendant’s alleged actions represent a
serious breach of the public trust and should not be lightly regarded.”